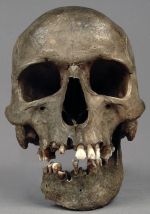 Thomas Hastie Bryce was born in Dalkeith, Midlothian in 1862. He attended the Royal Collegiate School in Edinburgh before matriculating in the Faculty of Arts, University of Edinburgh, in 1878 when he was 16 years of age. Bryce graduated M.A in 1882 then went on to study medicine and graduated M.B in 1886. Bryce was appointed lecturer in Anatomy at the University of Glasgow in 1892 before becoming Regius Professor of Anatomy in 1909. He held this chair for 26 years until his retirement in 1935. During this time, Bryce was also curator of archaeological and anatomical collections for the Hunterian Museum.

Although best remembered for his contribution to embryological studies, Bryce was also a keen archaeologist and made some significant finds in his lifetime. Bryce's involvement in archaeology included excavations that he conducted personally and those in which he was asked for his professional opinion on the remains discovered.  The human skull was of major interest to Bryce and he and fellow writer Matthew Young demonstrated observations made between skulls of different race and origin and the presence or absence of a metopic suture. Other papers in this field included "Teeth of Prehistoric Man" (Bryce, 1913) and "The West Scottish Skull" (Bryce, 1916).

The Hunterian Museum currently holds 14 human skulls in its collection that were excavated by Professor Thomas Hastie Bryce. The majority were excavated on his expedition to Arran in 1900 and were donated to the museum in 1912. The skulls are mainly Neolithic and from chambered tombs but there are two in the collection that are from Bronze Age burials. The skulls have been the subject of an undergraduate project (Debbie Forsyth, Hunterian Scholar 2004) and analyses by Dr Rick Schulting, Lecturer in Scientific and Prehistoric Archaeology, University of Oxford.