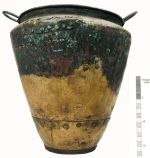 Andrew Henderson Bishop (1874 - 1957) combined participation in the family business with a keen interest in amateur archaeology and collecting. In his time, he had one of the largest pre-historic collections in Scotland. In 1951, the year the University of Glasgow celebrated its quincentenary, Bishop gifted his collection of prehistoric artefacts from Great Britain and the Continent to the Hunterian Museum. He also donated other items from Africa, America, Asia and Australia. Following the death of his wife, he moved to Switzerland in 1941 and remained there until his death in 1957.

The Bishop Collection comprises in excess of 22000 objects with approximately 65% coming from Scotland. Many of these are extremely rare and fine artefacts such as this internationally important Bronze Age vessel from Ireland. This rare intact metal vessel of the Late Bronze Age was used at feasts and could have contained ale, mead or wine.

Bishop’s wealth allowed him to acquire other collections which he absorbed into his own. Notable sub-collections include Cursiter (Orkney & Shetland), Dennison (Sanday, Orkney) and Day (Ireland), objects from at least another six named collections are contained within the Bishop Collection. He also acquired important Paleolithic assemblages from Knowle's Farm, Savernake, Wiltshire and various locations in France. The material contained within the Robenhausen assemblage from Switzerland (one of most important Neolithic sites in Europe) is internationally important and was included in a recent postgraduate research project [Leckie, K. 2011. 'Collecting Swiss Lake Dwellings in Britain 1850-1900'. Unpublished PhD Manuscript. Department of Archaeology, University of Cambridge].