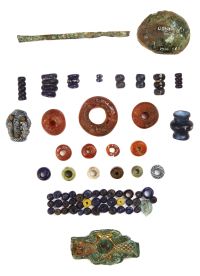 James Cursiter was a well known Orkney antiquarian. Like his contemporary, Andrew Henderson Bishop (1874 - 1957), whose antiquarian hobby was financed by his father's successful grocery business in Glasgow, known as Coopers (later Coopers Finefare), James Cursiter's father was a wealthy grocer and baker based in Kirkwall. The money from the family business allowed Cursiter to indulge his passion of collecting curiosities for his own private museum and specialist books for his library.

Cursiter seems have developed his interest in antiquarian pursuits through his collection of fossil fishes, rocks and minerals. He had been recognised as a collector in this field for many years and sold many important specimens to the Hunterian Museum at the University of Glasgow over a long period. He had one of the most significant collections of fossil fish of his time in Scotland. According to the memoirs of Sir John Flett, an eminent geologist and friend of Cursiter, "Orcadian archaeology he knew as well as anyone then living in the county and he had a remarkable memory and a great store of knowledge...".

When Cursiter retired in 1912, aged 61, his library was sold and the remainder of the fossil fishes in his collection went to the Hunterian museum. Flett records that no-one knew what became of Cursiter's antiquarian collections. It now transpires that Cursiter's collection was donated to the Hunterian Museum in about 1920 as, at that time, there was no public museum in Orkney.

It appears that the collections of Cursiter and Bishop arrived in the Hunterian at some point between 1914 and 1920 but were catalogued together. This has resulted in Cursiter's collection, which contains many important and rare artefacts, being effectively hidden from public view and inaccessible as a resource for Orcadian archaeology. Due to the unique labels on the objects, many in Cursiter's own hand, it is possible to attempt to recreate his collection and engender a new appreciation for Cursiter’s contribution to Scottish archaeology. The potential of this material for research collaboration, reinterpretation and display with Orkney Museum is currently being investigated.