One of the first actions of William Pitt Dundas, on being appointed as Registrar General for Scotland, was to write to the Treasury in London asking permission to appoint a Superintendent of Statistics for the General Register Office in Edinburgh.  The Scottish Registration Act did not mention such a post, so the additional salary would have to be approved by government.  The General Register Office in London had boasted a famous Superintendent of Statistics since 1839.  This was William Farr, a medical man, who wrote lengthy commentaries for the annual reports of the Registrar General for England and Wales, and decided how the statistical tables should be presented.  He also developed a classification system for causes of death, the most important index to public health at that time.

When the Scottish Registration Act passed in 1854, the Treasury had expected that the format of the vital statistics of Scotland should simply follow those of England, and that a senior clerk at the GROS could be left to produce statistical tables based on the English pattern.  Pitt Dundas would not accept this.  He wanted a medical man of his own to take charge of the statistics, and to write the annual reports.  Behind the scenes there was much lobbying from the Royal College of Physicians of Edinburgh, and the name of James Stark had already been presented to Pitt Dundas as the most suitable equivalent to Farr in Scotland.

The College was also anxious to prevent Scottish death statistics from falling into the hands of someone who was not a doctor, and when the Scottish Registration Act was passed, they sent a letter to the press, insisting:

'that to carry out with real accuracy a scientific system, no mere clerk will suffice - A medical man who understands the nomenclature of diseases, and can from his own knowledge check inaccuracies, should be conjoined with the Registrar: one of business habits, and who could dedicate his whole time to the work, might easily render these returns, valuable public Documents.'

Pitt Dundas was sufficiently impressed with these arguments to persuade the Treasury to let him appoint a doctor, but not a full-time one. 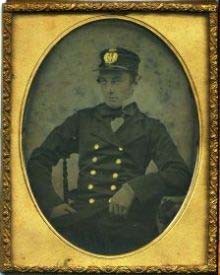 The first Superintendent of Statistics, Dr James Stark, was a fellow of the Royal College of Physicians of Edinburgh, curator of its museum, and had long been active in the field of vital statistics.  He was born in 1811, the son of an Edinburgh printer, and he studied medicine at Edinburgh University, where he took his M.D.  The printing connection was continued by his marriage to Isabella Black, the eldest daughter of the Edinburgh publisher Adam Black, a well-known radical who became Lord Provost (mayor) of the city, and a member of Parliament.  Stark was a general practitioner in Edinburgh until his appointment to his new position in 1855.  A man with wide interests, he was a member of the Statistical Society of London, and published a number of articles on subjects such as smallpox and the unhealthy state of Edinburgh.  He was also an active member of the Church of Scotland, and convener of its registration committee.

The agreed salary for Stark's post was low, only £250 a year, and Stark accepted it on condition that he could keep his private practice, though from 1860 he was effectively full-time.  Although struggling against the problems of a poorly financed central office, and, from the late 1850s, bouts of ill health, Stark made a considerable impact on the presentation of Scottish death statistics, which are discussed in the sections on Health and Disease, and Death and the Weather.

Stark liked controversy, and, apart from his numerous articles on vital statistics and meteorology, he found time to write a couple of substantial pieces attacking the doctrine of the Trinity.  By the 1870s his health was giving much cause for concern, and his repeated absences from the office caused a breach with Pitt Dundas, whose own regular absences from a post with a much larger salary than Stark's were not so easily explained.  As a result, there was always a backlog in the production of the annual reports, which were sometimes published four or five years late.  Stark's absences held up the publication of the 1871 census of Scotland to such an extent that Pitt Dundas finally forced him to resign in May 1874.  The Treasury tried to refuse him a pension, on the technical grounds that part-time posts did not attract civil service pensions, and that he had not been a full-time civil servant when the Superannuation Act was passed in 1859; but an outcry from the medical profession, led by the Lancet, won him a grace-and-favour pension.  Stark died on 2 July 1890.

Here is a list of the Superintendents of Statistics, and the annual reports for which they were responsible:

Stark's immediate successor, Dr William Robertson (1818-1882) was a full-time official, and was paid on a salary scale of £450 to £500 a year.  His father, George, had been Deputy Keeper of the Records of Scotland, and Robertson lived with his widowed mother, Eliza, and two sisters in Albany Street, Edinburgh.  The family were evidently well off, as Eliza appears in the 1871 census as living on 'Money from Property,' and her two daughters on 'Interest of Money.'  Robertson was in his mid-fifties when appointed as Superintendent of Statistics, and had to cope with an expanding amount of work in the office, including the demands of the Vaccination Act.  He was in office for a relatively short time before he retired, but during the period of Robertson and his successor Blair Cunynghame, most of the medical profession was converted to the bacterial theory of the causes of disease, as developed by Pasteur in France, Lister in Scotland, and Koch in Germany.  This, together with a growing understanding of pathology, encouraged more systematic classification of diseases, in which the Royal Colleges of Physicians in both London and Edinburgh played a part.  Robertson never married and died of heart disease on 25 August 1882, leaving a personal estate of £7,400. 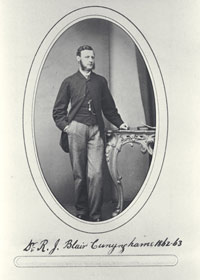 Dr Robert James Blair Cunynghame (1841-1903), who took over as Superintendent of Statistics in 1884, was, like his precedessors a graduate of the University of Edinburgh.  He was the younger son of a 'good' family, and served as an army medical officer in India for a short period, but returned to Edinburgh on inheriting some family property.  He gave up private practice when he was appointed at the GROS, but retained his work as medical officer to an insurance company (this type of activity usually paid a doctor well).  He was a prominent figure in the medical elite of Edinburgh, and much involved in philanthropic work.

Although both Robertson and Blair Cunynghame performed their duties conscientiously, they did not leave a record of publications that demonstrate the kind of personal interest in social statistics shown by the first Superintendent, James Stark, nor of the fourth, Dr James Craufurd Dunlop, who succeeded Blair Cunynghame on his retirement in 1904.  Dunlop was already working in the GROS, and was warned when he accepted this promotion that the post of Superintendent still had no pension attached to it.

Dunlop became Registrar General for Scotland in 1921, and his career is discussed in the section on Registrars General.  He continued to hold the post of Superintendent in conjunction with the top job until he retired in 1930.  Dunlop's salary for this combined post was on a scale of £850 to £1000, rather less than Pitt Dundas had received in the mid-nineteenth century for his two combined roles, even though the value of the pound had fallen considerably since Dundas's time.  Dunlop finally managed to overcome the backlog in the annual reports of the Registrar General for Scotland.  He was a vigorous Superintendent, with a strong interest in vital statistics as a tool of social research, but by the time he retired, the Scottish Office was beginning to question whether it was necessary for the post of Superintendent of Statistics to be held by a doctor.  Dunlop and his successor Andrew Froude insisted on having a medical Superintendent, but internal analysis of the post indicated that medical knowledge was rarely required, and that any technical information could be supplied by consultation.  The Scottish Office was persuaded to appoint Peter Laird McKinlay (1901-1972) as Superintendent, a doctor who combined the post with that of Medical Officer (Statistics) for the Department of Health for Scotland.  McKinlay, like Dunlop, had a strong interest in social statistics, and published extensively.  He was a pioneer in the study of health inequality, investigating death rates and stillbirths in illegitimate children, the effects of the Second World War on infant mortality in different social classes, and infant nutrition.  Since the Second World War, Scotland's vital statistics have been organized by a statistician, though there is still a medical officer to advise on issues requiring medical knowledge.