Although legal considerations were probably uppermost in the minds of those who framed the Scottish Registration Act of 1854, the importance of vital statistics in public health was also widely appreciated.  There was a growing 'statistical movement' in Europe, where pioneer statisticians such as the Belgian Alphonse Quetelet argued that accurate national statistics were of enormous importance to the state.  Medical men were amongst the warmest supporters of the Scottish Registration Act, believing that Scotland was disadvantaged because it had not immediately followed the English example in recording vital statistics.

In the years leading up to the Scottish Registration Act of 1854, several prominent members of the Royal College of Physicians of Edinburgh, particularly Professor William Pulteney Alison of the University of Edinburgh, made it clear that they did not approve of William Farr's method of classifying deaths in the statistical returns of the Registrar General for England and Wales.  The Royal College had been pushing vigorously for Scottish registration since 1841, but did not want to adopt the 'errors' of the English model.  In 1847 they passed a resolution:

'That it is the opinion of this College that any Registers of diseases, drawn up according to the forms now in use under the authority of the Registrar General in England, will necessarily be fallacious - and that by an alteration of the Schedule employed for the purpose, and by the use of a Shorter and simpler nomenclature of diseases, Registers of Mortality might easily be framed in Scotland, admitting of easy comparison with those in England, but greatly surpassing them in precision and scientific value.'

Although the mortality statistics of England and Scotland look much the same on the surface, there were different principles underlying the ways they were reported.  The statistical tables deal with the same issues of birth, marriage and death, broken down into the main administrative areas of the two countries, and relate them to the estimated size of population.  But the way in which they are grouped in the textual section of the annual reports is entirely different.  The difference reflected a semi-public warfare between the two Superintendents of Statistics in London and Edinburgh.  William Farr, who was much involved with the sanitary movement in England, organized his statistics to emphasize the difference between mortality rates in town and country, and compared a group of  four 'healthy towns' with the worst ones.  He wanted to support the movement for better sanitation, and he accepted the 'miasmatic' theory that linked epidemic disease to the stench of filthy cities. 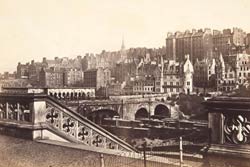 James Stark, like other leading members of the Royal College of Physicians of Edinburgh, had different views of the causes of disease, and they stressed the factors of cold, hunger and poor housing.  Stark therefore divided Scotland into 'Three Great Divisions, the Insular, the Mainland, and the Town District.'

This allowed Stark to compare mortality in town and country, as Farr did, but it additionally took account of his view that climatic conditions in the different parts of Scotland also affected mortality.  Very roughly, the Farr view might be said to concentrate on sanitation, and the Stark view on standards of living and the rigours of the Scottish climate.  In a period when there was no knowledge of the relation of micro-organisms to disease, both approaches had much to commend them, and they were not, in fact, mutually exclusive, but the debate between the two Superintendents of Statistics became quite cantankerous.

Stark, influenced by Professor Alison, believed that it was impossible under Scottish conditions to be very accurate about causes of death until all deaths were certified by doctors.  At the time when registration began, this looked unlikely because many people could not afford to call a doctor when they fell ill, and there was also a shortage of doctors in rural areas.  To avoid some of the problems caused by vague descriptions of causes of death given by family members, Stark recommended a rather unwieldy system where diseases were classified by their 'seat' or position in the body.  Hence pneumonia should be classified under diseases of the chest, which any layman could do, and a more precise classification could then be made by the doctor who had attended the deceased, if a doctor had been present.  One of the main objections to Farr's classification was that it tended to emphasize the immediate rather than the underlying cause of death.  For example, complications of pregnancy and childbirth might be classified under (say) haemorrhage, which would distort the statistics of maternal mortality.  The two Superintendents of Statistics even disagreed over hydrophobia (rabies).  Farr called it a 'zymotic' disease, due to a poison in the blood, while Stark favoured classifying it as an act of violence, due to the bite of an animal.

The two sets of national statistics on death registration differed quite markedly in the 1860s and 1870s, because Stark would not accept Farr's insertion of 'miasmatic' diseases into the list of causes of death.  In 1861 Farr decided to alter the English classifications into even more complex groupings.  The Edinburgh school favoured simpler classification, and Farr accused Stark of avoiding complexity simply because of the extra work involved in producing the statistical tables.  There was some truth in this, because the General Register Office in Edinburgh was very small, the annual reports had to be kept fairly short for financial reasons, and Stark was always some years behind with them.  Stark was so annoyed with Farr's new system that he refused to adopt it, and made a public attack on Farr in the Glasgow Medical Journal of 1865:

' . . . a Statistical Classification has to deal with facts, and not with theories.' 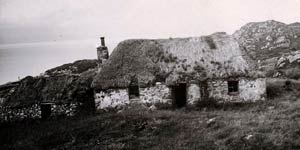 Stark was scornful of Farr's 'miasmatic' approach, arguing that Highland crofters lived in overcrowded huts with dirt floors adjoining the cowshed, in a dreadful 'miasma' of animal excrement, but that their death rate was still lower than that of townsmen.

The fight continued until the successors of Farr and Stark began to use systems related to the classification of diseases produced by the Royal College of Physicians of London, who included Edinburgh representatives in their discussions.  By the early twentieth century, greater understanding of disease causation, and pressure for an internationally accepted list of the causes of death drew them closer together, though even in the early decades of the twentieth century, James Craufurd Dunlop, as Scottish Superintendent of Statistics, was still insisting that the Scottish method of emphasizing the underlying cause of death was the best way to proceed.

Statistics on infant mortality, later joined by statistics on stillbirth, were still regarded as the major indexes of national health, though they were joined by other sources, such as reports of the Medical Officers of Health, and, from the early twentieth century, the reports of the medical inspectors of schoolchildren.