Although Medical Officers of Health (MOHs) were not part of the Registrar General's department, the relationship between the registration service and the public health service was very important in protecting the nation's health. 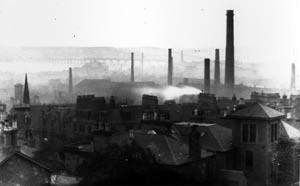 MOHs emerged as part of the growing sanitary movement in nineteenth-century Britain, amidst growing anxieties about the unhealthy state of towns and the need to control epidemic disease.

Liverpool set the pattern by appointing the first Medical Officer of Health in 1847, and a series of Public Health Acts in England in the mid-nineteenth century gave local authorities more power to enforce sanitation and deal with infectious disease.  These Acts did not apply to Scotland, but General Police (Scotland) Acts in 1850 and 1862 allowed Scottish urban authorities to take more initiative in policing and public health and to raise funds for this, though they were not at first compelled to do so.

Although some regions were slow to act, Glasgow and Edinburgh both rapidly adopted the Police Act of 1862, and employed their first Medical Officers of Health.  Glasgow's first MOH was part-time, but the post became full-time in 1872.  Appointment of an MOH became compulsory for all Scottish counties and burghs from 1889. 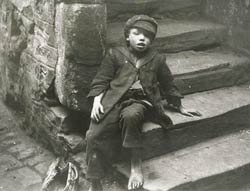 Although Scottish mortality statistics were still very crude, and population estimates for the cities even cruder, they were received with much excitement amongst Scottish sanitary reformers, since for the first time they allowed a more accurate comparison with the statistics for England.  Supporters of sanitary reform in Glasgow armed themselves with the registration statistics and argued in debates of the town council in the late 1850s that Glasgow's mortality rates were shockingly high, and comparable to the worst English statistics for notorious cities such as Liverpool.  The Registrar General's figures made it harder to argue against the need for city improvements, and set the scene for Glasgow's adoption of the Police Act and the appointment of MOHs.

The MOHs often became powerful men in their districts, and although they had to fight against conservative or penny-pinching local authorities, by the early twentieth century their views carried much weight.  The reputation of the medical profession was rising at this time, and the MOHs could always use the Registrar General's mortality statistics for comparative purposes, and to argue the case for local sanitary improvements.

Registration and the MOHs

Many MOHs were extremely interested in social research, and co-operated with local registrars in producing social statistics.  Accurate mortality tables were very important to their work (and to their political influence), and in the larger towns, pressure from the MOHs in the later nineteenth century led to many more deaths being certified by doctors.

Local registrars were instructed to send weekly copies of their returns to the MOHs, who could thus keep a check on disease and possible epidemics in their district in advance of the Registrar General's publications.  The annual reports of the Registrars General were obviously of great interest to the MOHs, and in Glasgow the surviving set of copies from the MOHs' office are vigorously underlined in places, and the statistics are occasionally corrected in longhand.

When Dr James Craufurd Dunlop became Superintendent of Statistics at the General Register Office in 1904, the relationship became even closer.  The MOHs had their own professional society, which Dunlop addressed from time to time, and he appreciated the need for mutual co-operation.  In the first decade of the twentieth century the focus was particularly on infant mortality, and in 1907 the Glasgow MOH, Dr A.K. Chalmers, wrote informally to Dunlop:

'I have been endeavouring to follow the Infantile Death rate in the counties of Scotland since the beginning of registration, but find no shorter way than by tabulating the yearly results.  May I ask whether you can supply me with the rates for decennial periods?'

Dunlop was very co-operative, offering to provide Chalmers with a full set of statistics, including figures not previously published.  Both wanted ammunition to raise political awareness of infantile mortality, and from 1907 the MOHs in larger towns reciprocated by furnishing the Registrar General with information on stillbirths, which his own officers had no means of calculating.  In 1925 Chalmers and Dunlop met privately to put pressure on the Corporation of Glasgow to make sure that local police surgeons sent the registrars a copy of the death certificate in any case they investigated, since a police post-mortem sometimes altered the cause of death on the original death certificate.

Relations between the MOHs and the Registrars General were not always harmonious.  Occasionally, an MOH, full of enthusiasm for social improvement, would ask local registrars to exceed their powers.  The MOH for Sutherland in 1912, disgusted at the high number of deaths registered without a doctor's certificate, urged the registrars to refuse to issue informants with certified extracts of the register entries in such cases.  The Registrar General had to point out that registrars had no power to do this, and that the MOH was exceeding his authority, but he noted indulgently in office correspondence that the new MOH for Sutherland was a young fellow, who had a lot to learn.

Even Dunlop, normally very keen to co-operate with the MOHs, had to point out to them that he could not authorize changes in the structure of death certificates, or allow unscheduled additions to them, without an Order in Council.  In 1929 there was some pressure from the MOHs, during a government inquiry into maternal mortality, to include more information on the death schedules sent by the certifying doctor.  They wanted to know whether a woman had been pregnant or recently delivered when she died, regardless of the actual cause of death.  Dunlop could not approve this, although keen to have information on the subject, and had to refuse such requests until they were authorized, shortly afterwards, by an Order in Council.  Only married women were included in the survey, and Dunlop refused several pleas from the MOHs to include unmarried women as well because this had not been sanctioned.  He did not refuse simply for bureaucratic reasons.  Local registrars were not well paid, and many part-time registrars were still paid a fixed rate for each job.  Dunlop knew that they would resent demands for more information, unless an extra fee came with it.  Knowing this, the Department of Health for Scotland agreed an extra fee to the registrars for sending returns to the MOHs on maternal deaths.  Doctors, too, often resented being asked for extra information, but since many of them were state subsidized after the National Insurance Act of 1911, it was more difficult for them to refuse.

The registrars continued to work with the Medical Officers of Health until the MOH post ceased to exist.  After the Second World War, the NHS began to take over much of the work previously done by the MOHs, and their duties in public health were divided amongst other agencies.  The post was discontinued in 1974, to the regret of many who remembered their forcible approach to public health in Britain.