As in England and Wales, registration in Scotland depended on a network of local registrars of births, marriages and deaths, but arguments over how they should be appointed held up the introduction of registration north of the border.  The problem was twofold: vested interests, and expense.  The Scottish Registration Act got round the first of these difficulties by offering the new post of registrar to the men already responsible for compiling the old parish registers, the session clerks of the parish churches.  This overcame the Church of Scotland's objection that registration would deprive session clerks of their traditional fees.  Once these session clerks died or retired, parochial boards were free to replace them with registrars of their choice.

Many Scottish ratepayers also feared that the new system would cost a great deal.  Parochial boards had the choice of paying the registrar an annual salary set by themselves, and raising a special local rate from which to fund it, or allowing him only the statutory fee set by the Registration Act.  This was 2 shillings (10p) for the first 20 events he recorded, and 1 shilling for each subsequent event, in any six-month period.  There were other possible sources of income, such as £1 charged to couples for attending their marriage in person, but these proved to be worth very little.  Informants who came to register a birth were entitled to receive an extract of the entry free of charge, but registrars could charge a fee for providing newlyweds with an extract of their marriage entry (i.e. a marriage certificate), and the public also had to pay for any additional extracts requested from the registers.

Local authorities usually chose the method of payment that cost them least, and paid registrars according to the size of the parish and the amount of work involved.  In large towns, where registrars were very busy, the burgh authorities generally employed several full-time registrars on fixed salaries, while in the countryside, part-time registrars were common, and were paid according to the number of entries in the registers.  In some thinly populated areas, the work generated only a few pounds a year.  A year after the coming of registration, the city fathers of Glasgow were congratulated on their economical management:

'The whole amount paid to the ten Registrars of Glasgow, for the past year, amounted to £1382 13s., or at the rate of about 7-8th of a penny to each inhabitant.' 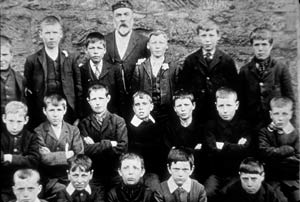 Given this low rate of pay, parochial boards sometimes had difficulty in attracting men with enough education to do the work properly.  In some country parishes, a doctor or solicitor might take on the duty, but the most obvious candidate was, as in the past, the session clerk, who was also likely to be the local schoolmaster.

Scottish parochial boards had limited funds, and found it convenient to appoint a single person to combine several parish posts, including schoolmaster, clerk of session, inspector of poor, and registrar.  Taken together, the pay from all these duties might be enough to keep a schoolmaster in a small parish.  Alternatively, postmasters, merchants or grocers might be employed as registrars because they had shops or offices open at convenient times (or because they had clout on the parochial board), but some parishes appointed ploughmen or weavers because they had no other choice.

Inevitably, the registration examiners occasionally found some of the registrars unfit for duty.  One examiner wrote:

'The Parochial Boards measure their pockets, not the necessities of the public service . . . [and] have not yet arrived at a just estimate of what is due to a Registrar who faithfully and honestly acts up to his instructions.'

The boards sometimes employed an elderly or incapacitated parishioner who might otherwise have needed poor relief from the parish.  In these cases, the registrar's fees were a kind of unofficial pension.  Getting rid of an incompetent registrar was a cumbersome process, since only the sheriff had the legal power to sack him.

The examiners travelled throughout Scotland, checking on the accuracy and clarity of the registers, the competence of the registrars, the standards of the registration 'offices', and whether the registers were kept in a safe place.  The registrars had to keep two sets of books, one for the parish, and the other for transmission to Edinburgh, and the examiners checked carefully to see that the entries were the same in each.  In most cases they were satisfied, but in a few parishes they reported that the registrar was slipshod, absent, or, in extreme cases, drunk.  The registers should have been kept securely in fireproof iron boxes, but this could not be guaranteed.  The cities had dedicated register offices, but elsewhere the 'office' might be a shop, schoolroom, or private house.  In Glenshiel, the schoolmaster had a very unsuitable house provided by a particularly mean parochial board, and the examiner was not happy with the conditions in which the registers were kept:

'[The schoolmaster's] dwelling is a miserable hut with a thatched roof.  It consists of two rooms, a bedroom and a kitchen, neither of which is floored.  The window of the bedroom, (where the Books were examined) is about 1½ foot square; the three lowest panes must have met with an accident, as their place is supplied by a parcel of wood . . . There are two beds in the room, which, beyond a doubt, are occupied by the entire family.  There is no ceiling; nothing but the rafters and the thatch, which can hardly be discerned by means of the scanty light let in by the window, still more darkened by the smoke issuing from the other miserable apartment.'

The examiners sympathized with the problems of registrars who had to deal with unhelpful doctors or clergy.  If doctors transmitted unintelligible death certificates, or failed to communicate at all about people they had attended in their last illness, the registrar was supposed to chase them up, but this did not improve relations in the parish.  The clergy, too, could be careless about filling in marriage schedules properly, so the ideal registrar had to be diplomatic as well as efficient.  Informants were often confused about such subjects as a baby's precise date of birth or the spelling of its names, and if no doctor had attended, they were sometimes imaginative in describing causes of death in the family.  The registrar was expected to sort this out, without imposing his own views on his fellow parishioners. 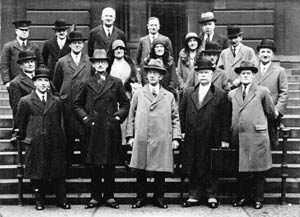 Once the early difficulties were resolved, or the first registrars replaced, the system generally worked well.  The General Register Office in London sent an ambassador in 1871 to compare registration in England and Scotland, and he noted approvingly that the local schoolmasters were an excellent body of men, generally of a higher standard than English registrars, and well fitted for their task.

(Image: Registrars' meeting, 1931, by kind permission of the Registrar General for Scotland.)

The Act allowed registrars to employ an assistant to cover their absence or illness, so long as the Registrar General was officially informed of the assistant's appointment; but the examiners knew that wives and other family members often took on this duty unofficially, in order to keep the fees in the family.  Shortly after his appointment as the first Registrar General for Scotland, Pitt Dundas received a forcible letter from his nephew, Robert Dundas of Arniston, urging that the wife of his local schoolmaster be allowed to act as assistant registrar, because she always carried out her husband's parish duties very effectively when needed.  Pitt Dundas wrote privately to the Registrar General for England:

'My opinion is against any such practice, on the ground chiefly that if allowed it would be an inducement to all Registrars who in the country at least may be Schoolmasters, Session Clerks &c to hand over their duties to their Wives & daughters.'

Some parochial boards would have been happy to employ the widows of their deceased registrars, in order to keep them off the poor rates, or because they had actually done most of the work when their husbands were alive.  The Registrars General, however, refused to allow women to be employed as registrars or assistants until the labour shortage of the First World War broke down their resistance.  But it is obvious that in rural parishes, registrars' wives and families often acted as a backup team.

As the population of Scotland grew and the registrars' work became more complex, more full-time registrars were appointed, and their posts became pensionable.  Part-time registrars are still employed in places where demand for their services is relatively light.