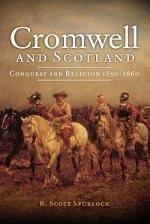 Spurlock, S.R., Cromwell and Scotland (Edinburgh, 2007) This study seeks to restore the causal role of religion to its proper place in the story of Oliver Cromwell's invasion and subsequent occupation of Scotland. Through analysis of the polemical tracts produced by both the Scots and the English it becomes apparent that both nations defined their positions in overtly religious terms and heralded support for their causes as right religion. The religious motivations of the English Commonwealth carried over into the policies of their decade-long occupation of Scotland, during which times regimes actively sought to undermine Scottish Presbyterianism and diminish its influence over the Scottish people. Policies of the Scottish Kirk and State in the previous decade had ostracised a significant portion of the Scottish populace. Therefore, English missionaries found among the Scots individuals eager to hear alternative forms of Protestantism preached. Dispelling myths that the sectarian presence had little intention of impact upon Scottish religion, this book charts the proselytising endeavours of the Independents, Baptists and Quakers, while seeking to explain their varying degrees of success.