My first degree (BA) was in History at Gakushuin University, Tokyo, where I also studied Japanese religions. Upon graduation, I took an Arabic course at Université de Tunis (funded by the Tunisian government) and then decided to pursue study at postgraduate level at Islamic and Middle Eastern Studies (IMES), University of Edinburgh. After completion of an MSc, I continued my research on early Sufism at doctoral level (supported by a PhD scholarship from the School of Literatures, Languages and Cultures) and graduated in 2010 with a thesis on the tenth-century Sufi preacher, Abu Talib al-Makki. After teaching at the University of St. Andrews, I held a position as Outreach and Project Manager at the Centre of Islamic Studies, University of Cambridge in 2010-12.

Since my arrival at the UK, I have taught various courses on Islam, Arabic texts and Japanese religious traditions at several institutions, and worked closely with fellow academics, clerics, civil servants and activists on a number of events and projects in the fields of both Islam and Japanese religions. My research interests have greatly expanded beyond medieval Sufi texts. At the end of 2012, in order to carry out more multidisciplinary work, I took up a position in Theology and Religious Studies, University of Glasgow, initially as Lord Kelvin and Adam Smith Fellow (2012-15), and subsequently as Lecturer. My current interests are concerned with intra-religious relations within Islam (e.g. Sufi-Hanbali interaction), as well as cross-cultural interactions, in particular Muslim-Jewish relations and the way in which Japanese traditions have been introduced and interpreted in Western societies.

I am interested in the individual, social and political aspects of religion through an exploration of different phenomena and manifestations of faith, including mysticism, philosophy, language, literature, art, music, politics and public life. My areas of research include the mysticism and epistemology of religion, Sufism, the Judaeo-Islamic tradition in al-Andalus and their relevance to the present. I am also pursuing a comparative study of Sufism and Zen, and research on clothing of Shinto deities, socio-political aspects of Kimono, as well as the rich historical connections between Glasgow/Scotland and Japan. My monograph, Islamic Mysticism and Abu Talib al-Makki: The Role of the Heart addresses the complexity of the Sufi-Hanbali interaction on one hand, and the Muslim-Jewish nexus on the other, through an exploration of the religious image of the heart in the works of al-Makki, and specifically in his book on ethics, Qut al-qulub (‘The Nourishment of Hearts’). (This was later published in Turkish as Ebû Tâlib el-Mekkî’de Tasavvuf in 2016.) In the field of Japan studies, I am co-author (with Olivier Salazar-Ferrer) of La chronique japonaise de Nicolas Bouvier which analyses a work of Bouvier, a famous Swiss photographer and traveller, on Japan.

In addition, I have organised or been involved with numerous academic and public events (e.g. British Association for Islamic Studies conferences, Glasgow-Japan networking events, Kimono-related public talks) to help improve religious literacy as well as cultural awareness and preservation in both Japanese and Islamic traditions, in public, cultural/heritage and charity sectors. I regularly act as a consultant on Japanese tradition and culture for BBC, museums and art galleries in Glasgow and Edinburgh. I have advised the Consulate General of Japan in Edinburgh on various Japanese cultural events, particularly in coordination with the Japan-UK Season of Culture 2019-20. (Please see the ‘Additional Information’ section below.)

• Sufism and Zen in the West (forthcoming collected work in collaboration with Michael Conway)
• Globalisation of Zen (Research Collaborator on the project funded by Kakenhi, the Japan Society of the Promotion of Science, led by Tomoe Moriya)
• The Japanese tea ceremony (Chado/the Way of Tea) as portrayed by Tenshin Okakura and its reception and practice in contemporary Britain
• Comparative mysticism (a collected work in collaboration with Louise Nelstrop is forthcoming)
• A study of the Jerusalem-born scholar, Abraham Shalom Yahuda, in particular concerning his scholarship on al-Andalus, his collection of Islamic manuscripts and his identity as a Mizrahi Jew in the modern Zionist context
• A study of religion and politics in modern Japan as reflected in the dress of Kami (Shinto deities)
• Manga (comics) as a visual narrative of the Japanese religious landscape
• Cultural representations of landscape, and the effects of transformation, dislocation and mutability (Landscapes of Mutability)

Referee and editor
• Section Editor of the Journal of Open Theology (Islam; Eastern religions) (2014 – present)
• Chair of the BRAIS (British Association for Islamic Studies) Prize Committee (2018 - present)
• Editorial board for the Journal for the Study of Interreligious Relations (2019 – present)

Yazaki, S. (2022) Classes of beings. In: Knysh, A. and Lange, C. (eds.) Encyclopaedia of Islamic Mysticism/Handbook of Sufi Cosmology. Brill. (In Press)

Yazaki, S. (2022) Classes of beings. In: Knysh, A. and Lange, C. (eds.) Encyclopaedia of Islamic Mysticism/Handbook of Sufi Cosmology. Brill. (In Press)

2017: Sufism and Zen (College of Arts, University of Glasgow)

2016-2017: Dismantling the East-West dichotomy? – the development of trans-traditional teaching of Sufism and Zen in Britain (Carnegie Trust)

2009: Centre for Medieval and Renaissance Studies (University of Edinburgh)

My areas of specialisation are in Sufism, Muslim-Jewish relations and Japanese traditions.

I am interested to supervise postgraduate students in the fields of Islamic studies especially regarding Sufism and Muslim-Jewish relations, as well as religion in Japan particularly in the post-Meiji era.

I am also interested in supervising comparative studies of monotheistic and non-monotheistic faiths (e.g. Sufism and Zen, Islam and Shinto), between monotheistic traditions (e.g. Muslim-Jewish relations) or within a single tradition (e.g. early Sufism and Western Sufism). Other topics of interest include in the relationship between morality and religion, the concept of purification in belief and doubts in faith.

Please contact me if you would like to discuss a proposal for postgraduate study relevant to these areas.

Contemporary Issues in Islam: Interpretation of the Textual Sources (Level 3 and Hons)

2022 Theology and Religious Studies, Nottingham* (12 Oct)
"Disciplining or learning the self: A comparative analysis of self-transformation and ethical conduct in Sufism and Zen"

2022 Islands in the Global Age: Identification, Estrangement and Renewal in the East-West Dialogue, Glasgow-Kyushu International Conference (28 March)
"Celebrating 'Japaneseness'?: The Book of Tea (1906) by Okakura Tenshin and its contemporary reception in Britain"

2022 Theology and Religious Studies Society, University of Aberdeen* (25 March)
"Religion and politics in modern Japan as reflected in the dress of Shinto deities"

2019 Religion and Society Seminar, Durham* (12 November)
"Al-Andalus as the foundation of the Zionist vision: A.S. Yahuda and his work on Jewish-Muslim relations"

2019 Alexander Ross and the first English translation of the Qur’an (1649): Book history, censorship and religion, Glasgow (12 September)
"Translations of the Qur’an outside of a monotheistic context: the case of Japan"

2019 International Convention of Asia Scholars 11, Leiden (17 July)
"'A cup of humanity': the Japanese tea ceremony (the Way of Tea) as portrayed by Tenshin Okakura and its reception and practice in contemporary Britain"

2019 European Association for the Study of Religions Conference, Tartu (26 June)
"We are what we wear: clothing of Shinto deities in manga comics as an ongoing process of Kami definition"

2019 Department of Politics, Philosophy and Religion, Lancaster University* (29 May)
"The Zionist as an ‘Oriental Jew’: A.S. Yahuda (d. 1951) and his work on Jewish-Muslim relations"

2019 Fantasy and the Fantastic Symposium, Glasgow (10 May)
"Religion and politics in modern Japan: clothing of Kami (Shinto deities) in manga comics"

2019 British Association for Islamic Studies Annual Conference, Nottingham (16 April)
"Understanding Sufism: Dances of Universal Peace UK and its Syncretic Approach"
Organised a panel: "What is Sufism? – An exploration of Sufi studies and Sufism in the West"

2019 Centre for the Study of Religion and Politics, University of St. Andrews* (4 April)
"Religion and politics in modern Japan: continuity and change in the clothing of Shinto deities"

2017 Sufism and Zen in the modern Western world: Spiritual marriage of East and West or Western cultural hegemony?, Glasgow (8-9 December; please see below "Selected knowledge exchange and collaborative activities" for details)
"Has the West changed the Eastern traditions?: Jewish Sufi Sam and his transcultural approach"

2017 British Association for the Study of Religions Annual Conference, Chester (4-6 September)
"Spiritual marriage of East and West or western hegemony?: the use of narratives in the writings of Idries Shah on Sufism and of D.T. Suzuki on Zen"

2016 Sufis and Mullahs: Sufis and their Opponents in the Persianate World, Exeter*
"Sufi-Hanbali dialogue: Abu Talib al-Makki and the meaning of piety" (14-16 April)

2022 Religion, Challenge and Change special event, Glasgow (6 Oct)
"Experiencing Japanese tradition through food and the spirit of tea" (flyer)
Supported by the Consulate-General of Japan in Edinburgh and Food Consciousness

2021 Landscapes of Mutability workshop "Imagining the future of travel (with reference to the past)", Glasgow (22 July)
Co-organised a series of online discussions which considered travel critically, aesthetically and creatively in this ecological crisis. Presented as part of The Dear Green Bothy, a collaborative cultural programme from the University of Glasgow’s College of Arts showcasing creative and critical responses to climate emergency.

Launch of online mail art exhibition: the project collected postcards from colleagues and artists, which provided us a glimpse of landscape experiences across Scotland (and beyond), highlighting a variety of interactions with landscapes under circumstances of limited mobility.

2019 Alexander Ross and the first English translation of the Qur’an (1649): Book history, censorship and religion, Glasgow (12 September)
Co-organised a colloquium in collaboration with Bob Maclean, Willy Maley and Thomas Munck; funded by Chancellor’s Fund and ArtsLab, University of Glasgow (programme)

2018 British Association for Islamic Studies Conference, Exeter (9-11 April)
Co-organised a conference at the University of Exeter

2017 Sufism and Zen in the modern Western world: Spiritual marriage of East and West or Western cultural hegemony?, Glasgow (8-9 December)
Organised a symposium funded by the Daiwa Anglo-Japanese Foundation and the University of Glasgow (Chancellor’s Fund and College of Arts)
Sufism and Zen programme and Sufism and Zen image gallery

2021 'Imagining the future of travel (with reference to the past)', The Dear Green Bothy - 26th UN Climate Change Conference of the Parties (COP26), Glasgow (online) (22 July)
"Urbanising pilgrimage: Incomparable Mt Fuji and its mini replicas, Fujizuka"

2020 Japanese cultural workshop, Glasgow (5 March)
Helped organise the trilogy of events in commemoration of the 9th anniversary of the Great East Japan Earthquake 3.11 (programme [N.B. screening of "Life: The Untold Story of the Fukushima Evacuation Zone", Dir. Chiaki Kasai, and talks on Fukushima were cancelled due to COVID-19])

2019 Lecture and workshop on Kimono, Kelvingrove Art Gallery and Museum (12 March)
Public lecture: "Kimono and the historical connections between Glasgow and Japan" (in collaboration with the Consul General of Japan in Edinburgh)

2018 School visit, Shawlands Academy, Glasgow (16 November)
Talk on "Kimono as religious dress" followed by an interactive session to secondary school students (S2 and 3 during RME lesson), in collaboration with Interfaith Glasgow as part of the Scottish Interfaith Week

Blog and video clip from the event: click here. 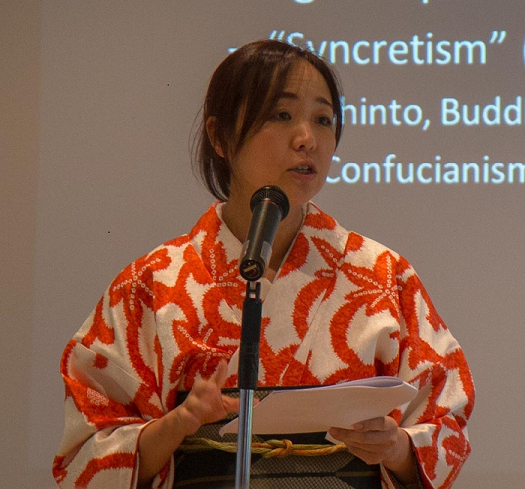