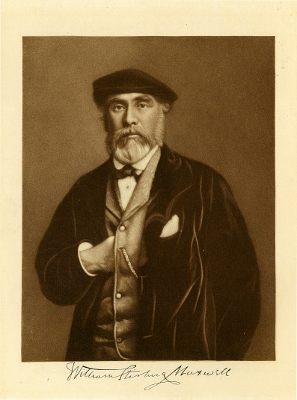 Sir William Stirling Maxwell’s Annals of the Artists of Spain (1848) was the first scholarly history of Spanish art in English and the first book on art to be illustrated with photographs.

His collection of Spanish paintings was the largest and most comprehensive collection of this school ever put together in Britain, whilst his outstanding library included books and treatises on Spanish art, as well as a vast number of emblem books and festivals books.

Much of his collection of paintings remains at Pollok House, Glasgow, former seat of the Maxwell family, which was given to the people of Glasgow in 1967. Many of his books are now in Special Collections at the University of Glasgow and his archives are held in Glasgow’s Mitchell Library.

A campaigner for Higher Education reform, Stirling Maxwell was elected Chancellor of the University of Glasgow in 1875.

The Stirling Maxwell Research Project studies the contribution of Sir William Stirling Maxwell (1818-78) to scholarship and collecting and raises awareness of his significance in these fields.

The Stirling Maxwell Research Project owes its initial impetus to the Centro de Estudios Europa Hispánica (CEEH), Madrid, and its Director, José Luis Colomer, who with the late Professor Nigel Glendinning, offered both vision and practical assistance in setting it up. Core funding for the Project has generously been provided by Santander Universities. The Project is directed by Dr Hilary Macartney and overseen by Professor Nick Pearce. 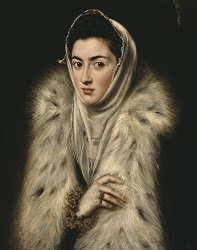 This collaborative research project is centred around the famous Lady in a Fur Wrap, traditionally attributed to El Greco (1541–1614), and related portraits in the Stirling Maxwell Collection.

The Lady in a Fur Wrap has fascinated viewers ever since it was exhibited in the Louvre, Paris, in 1838. Regarded as an early masterpiece painted soon after El Greco settled in Spain in the 1570s, its fame became linked to the rapid rise in the painter’s international reputation in the nineteenth century. Yet it remained an enigma. Direct, informal portraits of Early Modern women such as this are extremely rare and probably unique in a Spanish context. This led a number of modern scholars to propose a range of new possibilities regarding who painted it, when, and who it represents.

This project is examining new and existing evidence relating to the portrait and provides a forum in which specialists across several academic disciplines as well as museum professionals can assess and debate the arguments around it. We are now satisfied that all the evidence of stylistic and technical examination points to Alonso Sánchez Coello (c. 1531-88), principal portrait painter to Philip II of Spain, as the artist of this outstanding masterpiece. Our collaborative work continues as we prepare for its reinstallation and reinterpretation at Pollok House in 2020. A publication with full details of our investigation is also planned.

Unwrapping an Icon: Introduction from Joseph Briffa on Vimeo.

Unwrapping an Icon: X-raying the Portraits from Joseph Briffa on Vimeo.