Individual research projects tailored around the expertise of principal investigators.

Nuclear RNA involved in the regulation of mitosis

Project outline: Understanding mitosis is a major aim of fundamental molecular cell biology but is also vitally important for understanding cancer and stem cells. My lab has discovered novel patterns of nuclear RNA around mitotic chromosomes (see image below) and we’ve also discovered major global effects of RNA on mitotic chromosomes that have never been described before so this is a very exciting field to be in. Your project will be an important part of our lab’s work to understand how the mass of nuclear RNA in a cell affects mitosis. 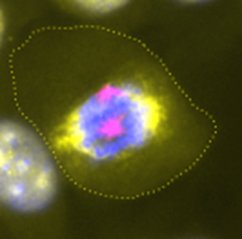 This image shows an example from our lab of a cell in the prometaphase of mitosis..its cytoplasm is outlined by the yellow dotted line to show the cell’s size more clearly. In the middle, the blue is the cluster of condensed mitotic chromosomes and the purple are the two asters that are beginning to radiate microtubules that will form the spindle. This is all typical of mitosis: the same as you would see in many cell lines. However, we also labeled all the nuclear RNA that was made just before mitotis in yellow and you see that this RNA concentrates around the clustering chromosomes (from El-Messeiry and Hamilton, manuscript in prep). It does not diffuse randomly through the cytoplasm as is widely assumed in the literature. This is an exciting discovery and other work from the lab suggests these RNAs have major effects on mitotic chromosomes.

Your project will involve use of CRISPR-based gene interference techniques (e.g. CRISPRkd, CRISPRi, CRISPRa) to explore the roles of these RNAs. RNAseq will be also used to characterise different RNA populations. You are also likely to use many standard, molecular techniques such PCR, Golden-gate cloning, Western blotting, fluorescence in-situ hybridisation, immunofluorescence and Q-PCR.

Supervision: Your work in the lab will be directly advised and taught by me, the PI of the lab, and even if you don’t have much lab experience, you will learn a range of vital molecular and cell-biology techniques with my direct guidance.

If you want more information about our work and PhD study in my lab, please contact me directly:

Our research cuts across the following subjects:

Individual research projects are tailored around the expertise of principal investigators.

A 2.1 Honours degree or equivalent.

Subject to confirmation for 2022 entry

For applicants whose first language is not English, the University sets a minimum English Language proficiency level.

All stated English tests are acceptable for admission to this programme:

TOEFL (ib, my best or athome)

For international students, the Home Office has confirmed that the University can choose to use these tests to make its own assessment of English language ability for visa applications to degree level programmes. The University is also able to accept an IELTS test (Academic module) from any of the 1000 IELTS test centres from around the world and we do not require a specific UKVI IELTS test for degree level programmes. We therefore still accept any of the English tests listed for admission to this programme.

Prices are based on the annual fee for full-time study. Fees for part-time study are half the full-time fee.

Additional fees for all students:

Depending on the nature of the research project, some students will be expected to pay a bench fee (also known as research support costs) to cover additional costs. The exact amount will be provided in the offer letter.

We offer a 20% discount to our alumni on all Postgraduate Research and full Postgraduate Taught Masters programmes. This includes University of Glasgow graduates and those who have completed Junior Year Abroad, Exchange programme or International Summer School with us. The discount is applied at registration for students who are not in receipt of another discount or scholarship funded by the University. No additional application is required.

The Scottish Government has confirmed that fees for EU students commencing their studies 2020/21 will be at the same level as those for UK student.

From 2021/22, new entrant EU students will pay the same fees as all other international students.

Additional fees for all students:

The College of Medical, Veterinary & Life Sciences Graduate School provides a vibrant, supportive and stimulating environment for all our postgraduate students. We aim to provide excellent support for our postgraduates through dedicated postgraduate convenors, highly trained supervisors and pastoral support for each student.

Our overarching aim is to provide a research training environment that includes:

All Postgraduate Research Students are allocated a supervisor* who will act as the main source of academic support and research mentoring. You may want to identify a potential supervisor and contact them to discuss your research proposal before you apply. Please note, even if you have spoken to an academic staff member about your proposal you still need to submit an online application form.

You can find relevant academic staff members with our staff research interests search.

*iPhD applicants do not need to contact a supervisor, as you will start your programme by choosing a masters from our Taught degree programmes A-Z [do not apply directly to a masters].

Before applying please make sure you gather the following supporting documentation:

I've applied. What next?

If you have any other trouble accessing Applicant Self-Service, please see Application Troubleshooting/FAQs.

After you have submitted your application

Any references may be submitted by email to: rio-researchadmissions@glasgow.ac.uk