Introduction to the Collection

Welcome to the Novel Collection at University of Glasgow Library

The Novel collection represents a resource of major importance for scholars of late 18th- and 19th-century fiction. The primary focus is on the fiction of the long 19th Century, although the collection includes a few items published before 1800 or after the First World War.

The collection amounts to just under 1,800 titles, including many works outside the boundaries of the mainstream 19th-century fiction canon. These are very valuable for critics and historians of the period’s popular, religious and social literature. 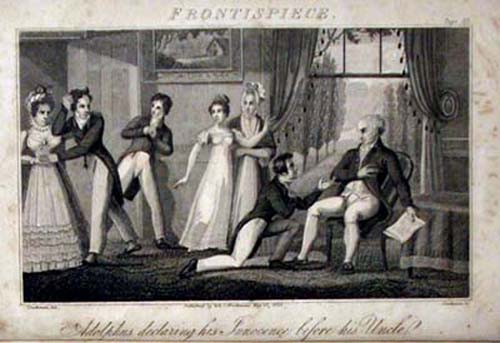 Highlights of the Collection

One of Novel collection’s particular strengths is early 19th-century fiction: it includes an impressive number of silver-fork novels, representing the life of Regency aristocracy by showing their manners and mannerisms, often with an ironical purpose. These novels had an immense public appeal during the 1820s and 1830s, yet they are hard to come by even in many British research libraries.

The collection is rich in women’s writing, including an excellent holding of first editions of novels and other texts by Mary Shelley and circle. At the later end of the 19th  Century, we hold almost all the novels by the prominent woman writer Mary Augusta (Mrs Humphry) Ward, whose central concerns – faith and doubt – were so much part of the late Victorian intellectual fabric.

Another cluster in our collection, ‘Imagined Geographies’, highlights the immense 19th-century interest in other cultures. As well as using little-known countries as a setting for romantic or adventure fiction, writers of this period also developed innovative techniques in ethnographic and travel writing. Our collection of foreign fiction in English shows the appetite for literary translations during the Victorian period, and will be valuable to scholars tracing the processes and patterns of literary transmission. The collection also holds a unique cluster of Scottish fiction amounting to around 300 titles, including several first editions of kailyard fiction as well as rare educational literature and boys’ fiction from the late Victorian period.

Identifying novels in our collection

The Novel Collection is the outcome of many years’ collecting and acquisition in the Library, but largely representes the holdings accumulated in the 19th Century (English Literature as not taught at the University until the 20th Century, so many of the books undoubtedly were acquired by the Library via the Copyright privilege that the University enjoyed from 1709 until 1836). Many volumes have been rebound, although illustrations and interesting supplementary material such as advertisements and booksellers’ lists have often been preserved.

The Spreadsheet of novel collection provides much additional information on the volumes that cannot be inferred from the volumes: meticulous research has been undertaken to establish the authorship of anonymously published novels and also imprint details. Each book entry also includes information on whether or not the book is illustrated, if it is a translation, and language details.

Another option for searching is to browse through the list of novels shelved at pressmark Z (this is the Library's 19th century way of classifying novels and reflects the Library's acquisitions, but does not include novels that might be found in other collections such as that of Charles Hepburn).

The Rarity of the Collection

The collection contains an impressive number of rare or unique items. The entire holdings amount to 1796 titles from the period between 1754 and 1946.

1579 items volumes were published between 1800 and 1900, and a further 83 between 1900 and 1914. Our earliest title is a French text, Les heureux orphelins by Claude-Prosper Jolyot de Crébillon; the most modern one is The Enchanted April by A. A. Phillips.

A major strength of the collection is the material published in the late 18th and early 19th-centuries; holdings include 1169 volumes dating from 1780-1836. According to Peter Garside’s surveys for the Corvey project, the years between 1800 and 1836 saw the publication of 2,880 fiction titles in Britain; Glasgow holds 1111 of them, approximately 40% of the total output. A significant number of the titles in our collection are first editions, or the only editions of rare texts.

This content for this website was originally created by Dr Zsuzsanna Varga with the financial support of the University of Glasgow's Chancellor’s Fund in 2007. It describes thematic, generic and author-based clusters of the Collection’s holdings, with bibliographical references, illustrations and collections of links to related sites.