The extensive holdings of Scottish fiction in the Novel collection amount to well over 200 titles. As well as the work of very well-known writers including Walter Scott, James Hogg, Susan Ferrier and John Lockhart, it includes many rare works by writers whose popularity in the Victorian period has not lasted to the present day. 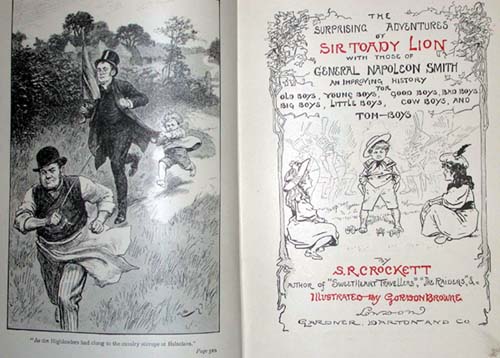 Scottish literature is here taken to mean works by authors who were born in Scotland, but who may have spent their adulthood elsewhere. For example, the collection includes work by the Victorian journalist and novelist William Black (1841-1898), a native of Glasgow and a contributor to the Glasgow Citizen, whose permanent residence was Brighton, and also by Margaret Oliphant (1828-1897), who was born near Edinburgh and who had a long-running and important relationship with the Edinburgh publishers Blackwoods, but who spent her adult life in Windsor and on the Continent.

These prominent writers are accompanied in the collection by less well-known authors who were nevertheless widely read in their age. Examples include Lady Caroline Lucy Scott (1784-1857), the author of evangelical and pious educational works in the 1830s and novels that attracted George Eliot’s scathing criticism in her famous essay ‘Silly Novels by Lady Novelists’; and G. R. Gleig (1796-1888), who made his name as a military writer; his The Subaltern, for instance, provides a narrative account of the Peninsular campaigns.

The collection has very good holdings in mid-19th-century novels written by authors of Scottish birth making their name in London, often in genre fiction. For example, William Black (1841-1898) was one of the most celebrated novelists of the period, specialising in maiden heroines and landscape descriptions, and often compared to Trollope. One of his major themes was the cultural encounter between Scotland and France, or the Highlands and London, and the first editions of his novels including The Daughter of Heth (1871) and Kilmeny (1883) are held in the collection. Similarly, the reputation of James Whyte-Melville (1821-1878) rested on hunting novels, but his entire output of twenty-six novels also includes dramas of contemporary life and period romances. Of these titles, fourteen are held in the Novel Collection.

The best represented 20th-century authors are the historical novelist Neil Munro (1863-1930), whose central concern is the impact of historical change on the Highlands, and John Buchan (1875-1940), the author of perennially popular adventure and spy fiction.

The collection also offers alternative angles on Scottish writing, especially travel writing and ethnography. Walter Scott’s Minstrelsy of the Scottish Border created a lasting interest in Scottish folklore, and also inspired Allan Cunningham (1784-1842) to collect Traditional Tales of the English and Scottish Peasantry (1822). The work of the early ethnographers was continued with more sustained impetus by Andrew Glass and Joseph Grant during the Victorian period. The collection also has strong holdings in writing by Scottish travellers, and accounts of travels in Scotland.

The Novel Collection holds at least 214 Scottish titles. Of these, 154 (over 70%) are not available in modern editions or outside university research libraries. Based on information in COPAC, the British union catalogue, 89 of the titles we hold are available in six or fewer libraries in the UK.

Some of our titles are exceptionally rare: COPAC shows that there are only three or fewer copies in UK libraries. These titles are the following:

Selected bibliography of Scottish Fiction in the Novel Collection

For detailed bibliographical information and holdings details, please click on the link after the relevant title. This will take you to the main library catalogue record.

William Alexander: Johnny Gibb of Gushetneuk in the parish of Pyketillim, with glimpses of the parish politics about A.D. 1843 Edinburgh: Edmonston & Douglas, 1873. Sp Coll Z1-b.17

C. I. Johnstone: Nights of the round table, or, Stories of Aunt Jane and her friends Edinburgh: Printed by John Johnstone, 1832. Sp Coll Z8-m.11

Extended bibliography of  Scottish fiction  in the Novel Collection