The period between 1820 and 1845 witnessed the rise of the fashionable novel or social satire. This genre, which aimed to depict elegant and aristocratic manners in detail, was named ‘silver fork novels’ by William Hazlitt in 1827 after the upper-class practice of eating fish with two silver forks. 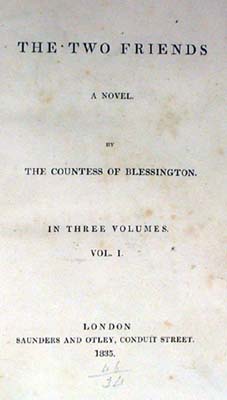 Fashionable novels, full of what Hazlitt called ‘the folly, caprice, insolence and affectation of a certain class’ were usually based on the social mixing of the affluent upper middle class or the provincial gentry with the aristocracy, providing a voyeur’s insight into aristocratic habits and life patterns. Once women writers turned to the genre, it became increasingly moralised: middle-class morality became central, and the novels detailed the demise of the aristocracy, though the characteristically Byronic heroes of the genre remained. In some ways, silver fork novels were oddly democratic, suggesting that class is not a matter of birth but derives from display in terms of habits, attire and décor. Their descriptions of gender and marital relations foreshadow Victorian contentions about women’s and men’s roles in the private and public sphere.

The silver fork fiction in the Novel collection represents a wide range of important titles. All the significant authors of the genre – Catherine Gore, Theodore Hook, Edward Bulwer Lytton, Lord Normanby and Robert Plumer Ward, are represented. This list is complemented by less well-known authors such as ‘Lady Humdrum’ who also offers a female perspective upon aristocratic values.

Our extensive collection of silver fork fiction amounts to seventy-five titles. 13 of these titles are available in modern editions, and another six were regularly republished in the 19th-century. Other titles, however, are held in no more than four British libraries according to COPAC. These are:

Selected bibliography of Silver Fork novels in the Novel Collection

These titles are listed alphabetically by author.

For detailed bibliographical information and holdings details, please click on the link after the relevant title (this will take you to the main library catalogue record for each item).

Extended bibliography of Silver Fork novels  in the Novel Collection

The Silver Fork Novel: http://www.victorianweb.org/genre/silverfork.html
Silver Fork Etiquette - a Hunterian Associate Project focusing on this collection by Abigail Boucher: https://silverforketiquette.wordpress.com/. To read more about the project see our accompanying blog.