The Library's Hill and Adamson collection consists of original calotype negatives and salted paper prints, later carbon prints, glass copy negatives, some equipment and some manuscript information. The collection is second in size and significance only to the key collection at the Scottish National Portrait Gallery (SNPG). As such, it complements the SNPG collection, for there is much that does not overlap.

The collection contains 468 salted paper prints dating from the 1840s. Many of the 444 individual prints were extracted in the past from albums; 24 additional original prints remain bound in a very scarce volume on St Andrews. These contemporaneous prints are supplemented by a considerable quantity of carbon prints made from the original negatives approximately five decades later.

The real treasure of the collection is the group of 490 original calotype negatives. This group represents a significant portion of the total body of work known to have been produced. It can be said with confidence that the majority of these were made by Adamson and Hill, working together as partners based in Edinburgh, in the period of 1843 to 1847. 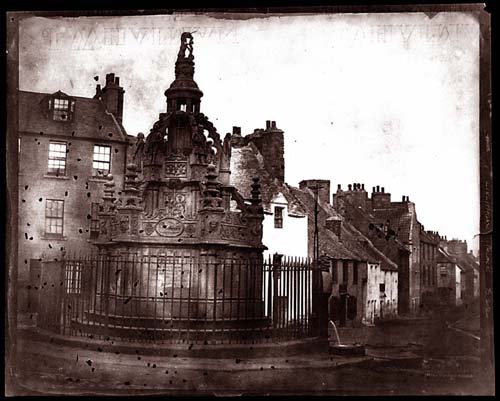 Most were taken in Edinburgh or in nearby locations such as Linlithgow (see photograph above: HA0502) and Newhaven. Some were taken in St Andrews, Glasgow, York and Durham. A few show indications of being earlier work created in St Andrews before the partnership; they may have been done by Robert Adamson alone, or possibly even by his brother Dr John Adamson or his colleagues.

A few can be proven to have been taken after Adamson's terminal illness or death, presumably by Hill acting alone, or in concert with a temporary partner. Three negatives made in South Africa have been positively identified as having been taken by Charles Piazzi Smyth. When he became Astronomer Royal for Scotland in 1845, Smyth took charge of the Royal Observatory on Calton Hill, immediately above Hill & Adamson's Rock House studio. These negatives were undoubtedly a gift to the photographers, likely as part of an exchange. There is a possibility, especially among the landscape and architecture photographs, that a few early negatives from other photographers were at some point mixed into the collection, perhaps even by Hill & Adamson themselves.

Go to next section: The Calotype Process