Conceptually, and in many ways, the photographic technique employed by Hill and Adamson was very similar to that still in use today. A negative was exposed in the camera, developed in a dark room and then printed on sensitive paper. Their cameras, while wooden and large, are easy to relate to modern cameras. However, their sensitive materials were quite different from ours in one important aspect. Modern photographic film and paper are highly refined highly technological products made under strict controls in a factory setting. In addition to the other problems they faced, Hill and Adamson had to make each and every sheet of negative or print material by hand. There are no significant records of their particular working practices. However, we know they were in close touch with the art's inventor, William Henry Fox Talbot (especially through their mutual friend, Sir David Brewster) and it can be assumed that their practice built on Talbot's approach.

The calotype negative process was sometimes called the Talbotype, after its inventor. It was not Talbot's first photographic process (introduced in 1839), but it is the one for which he became most known. Henry Talbot devised the calotype in the autumn of 1840, perfected it by the time of its public introduction in mid-1841, and made it the subject of a patent (the patent did not extend to Scotland).

The base of a calotype negative, rather than the glass or film to which we have become accustomed, was high quality writing paper. The sheet of paper was carefully selected to have a smooth and uniform texture and, wherever possible, to avoid the watermark. The first stage, conducted in candlelight, was to prepare what Talbot called his iodized paper. The paper was washed over with a solution of silver nitrate and dried by gentle heat. When nearly dry, it was soaked in a solution of potassium iodide for two or three minutes, rinsed and again dried. As long as this iodized paper was stored carefully, it could be kept for some time, so it was generally prepared in batches ahead of time.

Immediately before taking a photograph, a fresh solution of gallo-nitrate of silver was mixed up. This was made from equal quantities of a solution of silver nitrate and one of gallic acid; the solution was unstable and had to be used right away. Under weak candlelight, a sheet of iodized paper was coated with this solution, left to sit for about thirty seconds and then dipped in water. It was then partially dried in the dark, often using blotting paper. The calotype paper could be employed completely dry, but was more sensitive when moist, and in any case had to be exposed in the camera within a few hours of preparation (Talbot found that he could sometimes put it away for future use but its keeping qualities were never predictable).

Under near-total darkness, the sensitive calotype paper was loaded in the camera. It was exposed to the scene, sometimes for as little as ten seconds, usually for a time closer to a minute, and sometimes for tens of minutes. If one were to examine the sheet of paper after withdrawing it from the camera, no image would be seen (just as no image is visible on modern film when it is first removed from the camera). An invisible latent image was formed by the action of light. A fresh solution of gallo-nitrate of silver was brought into play. Washed over the sheet of paper in a darkened room, it developed a visible image, usually within a few seconds. When the operator judged that the development had proceeded far enough, the paper was then washed over with a fixing liquid. This was sometimes a solution of potassium bromide and sometimes a solution of hypo (similar to modern fixers). Washing and drying completed the process.

At this point, there would be a negative image, deep brown or black in colour, on one surface of the writing paper. Being plain paper, the temptation to correct errant details in pencil was natural to most operators. The artist Hill, and possibly the technician Adamson, frequently used pencil or ink to retouch the negatives. Sometimes the dried negative was waxed to make it more transparent.

Strictly speaking, the term calotype referred only to the developed negative process. Prints could also be made on calotype paper, exposed and then developed much like modern photographic papers, but this was a more complicated process and led to what were considered unsatisfactory cold print tones. Only a few prints were made experimentally using the calotype process itself. Instead, the common practice was to turn to Talbot's original photogenic drawing paper, invented by him in 1834 and the one first introduced to the public in 1839.

Talbot's original process was based on the same type of smooth writing paper employed in making the negatives. The printing paper was first soaked in a solution of common table salt, dried, and then brushed on one side with a solution of silver nitrate. This embedded light-sensitive silver chloride within the surface fibres of the paper. The dry paper was placed under the finished calotype negative, sandwiched under glass, and then placed in bright light. Within perhaps fifteen minutes, a visible image had formed on the print paper. It was then fixed, most often in hypo, washed and dried. The image would be present in rich brown tones, sometimes tending towards red, sometimes towards purple, depending on various factors and rarely fully controllable. These prints did not have a widely accepted name in the 1840s (they were sometimes called transfers). Today, they are generally called salted paper prints or salt prints. Like the calotype negatives, these plain paper prints could be easily retouched in ink or wash. However, unlike some of their contemporaries, Hill and Adamson preferred to do their work on the negatives, and modified the prints very little. 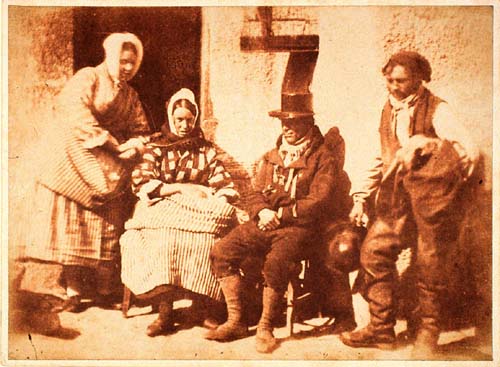 The calotype negatives and the salt print processes, both invented by Talbot, share many characteristics. In both cases, the final visible image was finely divided particles of metallic silver (the brown colours presented by this are a natural result of the scattering of light). Both were based on the same kind of writing paper; the image is in the surface fibers of the paper, not in an emulsion or under a coating. Both were really negative processes (being itself a negative, the printing paper reversed the tones of the camera negative back to the tones of the original subject). Multiple prints, of course, could be made from one negative. The sensitivity of the paper was suitable only for contact printing, meaning that no enlargement took place and that the negative had to be the same size as the desired final print. The salt prints were a printing-out process. The final image was composed of fine particles of metallic silver - the energy to reduce this silver from the sensitive compounds came entirely from the light, and the visible image formed under its action. It was a relatively simple and economical process and produced pleasing print tones. The calotype negative process was a developed-out process. It gained a much greater sensitivity by chemically amplifying an invisible latent image left by the light. The colour of the negative was not of much import and the extra complications in its preparation were worthwhile in the context of shortening exposure times.

Aside from the sheer work involved in producing each piece of thousands of sheets of sensitive material by hand, Adamson & Hill faced numerous uncertainties. The paper base was one of the most capricious and a good batch of paper was avidly sought after. Like Talbot, Hill and Adamson favored Whatman's Turkey Mill paper, a high quality product for writing. However, as a base for chemical operations, the paper had problems. It varied slightly in thickness from spot to spot. Patches undetectable when looked at by reflected light (as in writing a letter) became painfully apparent when light was shown through (as it would be for a negative). There were various chemical impurities. One of the most serious from a photographic point of view was the presence of tiny pieces of metal, invisible to writers, but ready to create a spot when hit by the chemicals the photographers employed. These particles came from buttons accidentally chopped up when the rags used to make the paper were processed. Chemicals were also not required to meet any standard and were only as pure as the skill (and honesty) of the chemist could make them. It was not unusual to have traces of gold in silver compounds and various contaminations and adulterations in other compounds. Another factor was water, the essential solvent that removed the photographically sensitive chemicals after use - if any traces remained, the print might fade or develop blotches. Nicolaas Henneman, Talbot's former assistant, set up the world's first photographic print establishment in Reading, England. The municipal water supplies were erratic, often flowing only a few hours a day, and heavily contaminated, particularly with organic materials. Fortunately, Adamson & Hill had a steady supply of pure water and this might do much to explain the better lasting qualities of their prints.

A final factor was the sun. Virtually all the images were taken out of doors in order to gain as much light as possible. Reflectors were almost certainly employed to control the light and to augment it where need be. On a good day, an average portrait negative outdoors might take about a minute's exposure. The prints, made on the printing out paper, took much longer to expose. The light had to filter through the paper negative and then provide all the energy to make the print image. An exposure time of fifteen minutes would be good - this could extend to half an hour or even several hours on an overcast day. Prints made with extended exposures like these eventually became dark enough but never had the richness of tones available with bright light exposures. In addition, they were more vulnerable to fading.

Go to next section: biographies of David Octavius Hill and Robert Adamson