The major part of Glasgow's collection can be traced directly back to Hill & Adamson's Rock House studio, on Calton Hill in Edinburgh. The studio had been set up by Robert Adamson in 1843 and was retained by David Octavius Hill after Adamson's untimely death early in 1848. Hill maintained his interest in photography but created little new in photography after Adamson's death. In 1872, an established photographer who had collaborated with Hill, Archibald Burns took over Rock House. Four years later, Alexander Inglis acquired the studio, originally operating under Burns' name before reverting to his own. His son Francis Caird Inglis took over the business in 1904; he continued to operate Rock House until his death in 1940 and his son maintained the business until 1945. 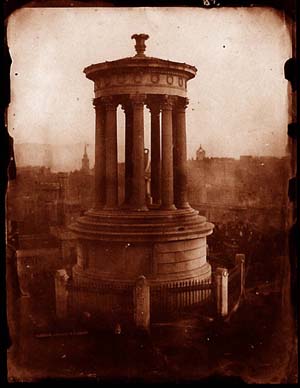 To the left is a photograph of the Dugald Stewart monument on Calton Hill in Edinburgh (HA637).

Many of the remaining negatives were variants of better known ones. Some were perhaps considered technical failures at the time, although their historical value is hardly diminished by this. And the negatives for some of their most famous images stayed at Rock House.

In 1941, the pioneering photohistorian and collector, Robert O. Dougan, approached Francis Caird Inglis' widow and arranged to purchase all of the material relating to Hill & Adamson. There was no detailed record of the contents of the collection made at the time. Although it is likely that some items were deaccessioned from this group, it must have remained largely intact. When Dougan, then City Librarian of Perth, accepted a post in Ireland, he realized that he wanted the collection to be kept together and he wanted it to be kept in Scotland. He arranged to sell the collection in its entirety to the University of Glasgow Library in 1953. The first exhibition from the collection was mounted in the Hunterian Art Gallery the following year

There are some mysteries about the present collection and the Library records from the 1950s are sparse. However, the earliest mentions of the collection count 490 negatives and "nearly 500" prints. This is exactly the number of negatives presently in the collection and about right for the print count. It is known that some of the prints were in albums when they came to the University and that early on they were removed from the pages by a paper conservator. As would have been common practice at the time, no records were kept of the contents and collation of the albums and the carcasses were not preserved. However, many of the prints have traces of glue on the verso, indicating that they were removed from a mount. Many prints are stamped "A" or "B". The glue patterns are consistent within these groups and it can be speculated that there were two albums in addition to the loose prints in the collection.