These collections are unique medical teaching material amassed by William Hunter in his career as anatomist, obstetrician and doctor. They differ from other parts of The Hunterian collection in that they represent things which Hunter and his school made and used professionally rather than acquired for leisure interests. 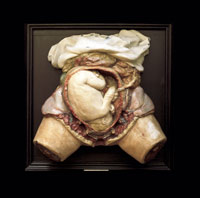 The collections comprise wet preparations of human tissues and organs, skeletal material and some animal taxidermy specimens. Both Pathology and Anatomy also have considerable amounts of post-Hunter material and this includes comparative (animal) anatomy specimens, fine 19th century wax models and specimens made using recent techniques such as corrosion and plastination.

Some of the most striking specimens in the Anatomy collection are those associated with William Hunter’s research leading to his most significant contributions to the advancement of medicine. Outstanding examples include the series of life size plaster casts of dissections showing the pregnant uterus, as illustrated in Hunter’s great work, 'The Anatomy of the Gravid Uterus Exhibited in Figures' (1774). Hunter contributed a great deal to the understanding of the lymphatic system and his mercury-injected preparations of lymphatic tissue are both beautiful and illuminating.

The Pathology material has elegant preparations particularly in the areas of birth defects and infectious diseases such as syphilis and tuberculosis that were commonly contracted, poorly understood, incurable and a challenge to the medical profession at that time.

Find out more about the Anatomy Museum where most of William Hunter's collection is housed.