The Hunterian is home to a diverse collection of scientific instruments dating from the early 18th century to recent technology from the late 20th century.

The earliest apparatus and equipment, which pre-date the formation of The Hunterian in 1807, are teaching and research instruments once used at the University of Glasgow.

Many objects come from William Hunter's own lifetime, when the Professor of Natural Philosophy (the subject now known as Physics) was John Anderson, nicknamed 'Jolly Jack Phosphorus' by his students.

Perhaps the most significant piece from this era is a model Newcomen steam powered atmospheric engine that James Watt tried to repair in 1763. It was his failure to coax the machine back to optimum capacity that sparked his invention of the separate condenser, the component that led to rapid expansion in British industry. 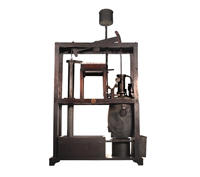 The collection's considerable 19th century holdings centre around the experimental apparatus and patented inventions of Sir William Thomson (Lord Kelvin), and the material given to him by contemporaries such as Hermann von Helmholtz, and James Joule. In the 1870s, Kelvin created the first purpose built teaching laboratory, which was considered highly revolutionary.

The medical instruments at The Hunterian include capsule collections such as the British Medical Ultrasound Collection, the Glasgow College of Nursing, the Royal Infirmary Lister Ward and the surgical equipment of medical pioneers such as William Hunter and William Macewen.

Material from the 20th century includes items associated with the chemist Frederick Soddy (father of isotopes), and a large group of mechanical and electronic calculators.