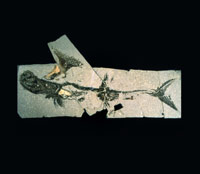 Specimens collected at the beginning of the 1800’s by Gideon Mantel (which found their way into the Thomas Brown of Lanfine Collection) came to The Hunterian in the late 1800’s. Gideon Mantel was one of the first dinosaur researchers and discoverers and The Hunterian has several pieces collected by him including Iguanodon and Megalosaurus teeth.

The fossil collections are amongst the largest in the UK and were built up over the last 200 years from departmental research and teaching collections. A significant number of specimens have been added by donation from collectors around the world.

One of the earliest published collections of fossils from Scotland is in the Hunterian Museum. The Reverend David Ure collection was published in 1793 in his volume entitled "The History of Rutherglen and East-Kilbride". The fossils are of Carboniferous age and include the earliest description of fossil ostracodes.

Another key collection is that of Alfred Leeds whose vast collection of Jurassic marine vertebrates came to the Hunterian Museum in 1919. This included plesiosaurs, ichthyosaurs, marine crocodiles, and a large specimen of Leedsichthys; the worlds largest fish.

The Hunterian trilobite collection is particularly strong and has recently been added to by the bequest of the collector, and University of Glasgow research assistant George Rae. Some of the fossils in his collection of over 6,000 are exquisitely prepared and of immense research value.