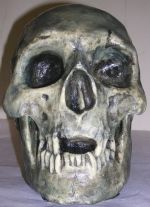 In 1817, during work to rebuild part of the Abbey Church in Dunfermline, the grave and remains of the ruined marble tomb of Robert the Bruce (1274-1329) were found. Inside a rotted wooden coffin, covered by fragments of Cloth of Gold shroud , and encased in lead, lay the skeleton of the king. It was removed, measured and drawn, and a plaster cast taken of the skull, before being reburied a few months later. The objects now in The Hunterian were obtained by Joseph Neil Paton (father of the painter Sir Joseph Noel Paton). His grandson Dairmid Noel Paton, was Professor of Physiology, at Glasgow, and his family donated the material to the Hunterian in the 1930s.

The Hunterian collection  includes a plaster cast of the skull, a foot bone (metatarsal), and fragments of the lead coffin, Cloth of Gold shroud and of the elaborate white marble table-top tomb itself. The remains  represent  some of the very few direct physical links with Robert the Bruce and the 14th century and the subject of considerable scholarly interest.