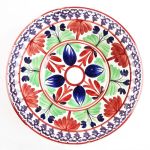 Henry E (Harry) Kelly (1931 - 2008), a graduate of the University of Glasgow, was one of the leading authorities on Scottish ceramics. His book 'Scottish Ceramics' is internationally recognised and he also wrote extensively on more specialised aspects of the industry. A passionate collector for many years, Harry's donation of spongeware and other ceramics to the Hunterian has allowed us to develop Scotland’s largest collection of this kind.

A large pottery-making industry flourished in central Scotland during the 19th and 20th centuries. Many well-known Scottish potteries produced a wide range of cheap plates, bowls, mugs and other tableware decorated with floral or animal designs applied with a sponge (hence the name 'spongeware'). These pots were particularly popular in Scotland and were exported all over the world. Harry’s publication 'Bell's Glasgow Pottery' has been acclaimed by archaeologists world-wide, who can now identify pottery wares from excavations on sites of this period.

Pottery collectors and historians of the pottery industry have in recent years shown great interest in these wares, as have interior designers. Harry's donation is extensively used by the Departments of Archaeology and the History of Art at the University of Glasgow for teaching and research.