Introduction to the Historical Collection 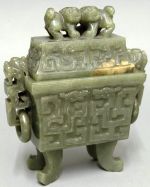 The Hunterian's Historical Collection is a diverse assemblage which contains items relating to the history of the Museum and the University of Glasgow, as well as other objects from the recent past. Small collections of death masks and Tassie medallions immortalise important people relevant to the history of the University such as William Hunter, the founder of our museum, William Cullen the renowned physician, and Adam Smith, the celebrated economist. The medieval Clerk’s Press and the Blackstone Chair, iconic pieces of furniture belonging to the University, are also in this collection along with original furniture from William Hunter’s house in Great Windmill Street, London.

Larger groups of material are from more recent bequests such as the collection of pewter and glass from William Clapperton which spans the 17th to 19th century. The Hague collection of musical instruments contains 70 wind instruments dating from the late 18th century onwards, several of which are rare and all of which are in a playable condition. The recent bequest of Harry Kelly in 2008 added the largest known collection of Scottish ceramics to the Museum’s holdings. The collection also contains objects of international importance such as the Renaissance parade shield, thought to be by Leonardo da Vinci, and the conductor’s baton belonging to Dr Hans von Bülow. The poignant personal effects of Lance Corporal Andrew Shaw of the 8th Argyll and Sutherland Highlanders, a University employee who lost his life in the First World War, are used for Remembrance Day and feature in a podcast made by the University to honour the Fallen.

Finally, the collection also contains a diverse selection of other objects including medieval European ikons, Italian majolica ware, Chinese jade, artefacts from the tomb of Robert the Bruce, a small selection of textiles and miscellaneous objects too numerous to mention.