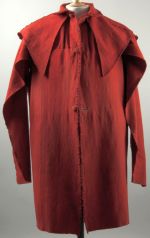 The Hunterian has a small but important collection of historic academic dress. The robes in the collection are mainly from officers of the University such as the Principal, Registrar and Rector and important academics such as Lord Kelvin and Lord Lister. The 19th century student gown in the collection is rare and of considerable importance. Although it had been on display in the past, it was kept in storage for many years until its significance was recognised by Dr Neil K Dickson, a former member of the Academic Dress Committee at the University of Glasgow and an expert in this area.

The story of the gown, its discovery by Neil Dickson, its comparative rarity and its conservation journey has attracted interest from many people including the BBC. When the Hunterian gains a larger store with increased exhibition space in 2015, it is hoped that the gown can be displayed again and that for the first time in many years, visitors to the museum can learn its story.

The academic dress in The Hunterian’s collection is currently being researched by Dr Dickson, Fellow of the Burgon Society. It is also featuring in the work of the Centre for Textile Conservation and Technical Art History where it is providing conservation projects for students. Many of the robes are challenging to work with as they are made from several different fabrics, such as velvet, and often have detail like fur facings and "frogs" (shapes in cord) on the sleeves.