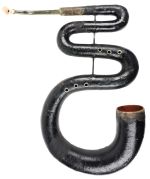 The life-long passion of Professor Bernard Hague (1893-1960) was collecting musical instruments. Bernard Hague began his career in Rochdale as an apprentice millwright at the age of 15. He came to the University of Glasgow in 1923 and became the James Watt Professor of Electrical Engineering in 1946. Hague remained at the University of Glasgow until his death in 1960.

Although he had many diverse interests, Bernard Hague was devoted to music and was an accomplished oboist. He was a member of the University Orchestral Society and was Governor of the Royal Scottish Academy of Music for fifteen years. As a hobby, Hague collected, and repaired, a small but excellent collection of over 70 wind instruments dating from the late 18th century onwards. Many of the instruments are still in good working order. Hague bequeathed his collection to the University of Glasgow and it was transferred to The Hunterian from the Department of Music. A selection of the instruments are on display.  This collection is regularly used by researchers and musicians.