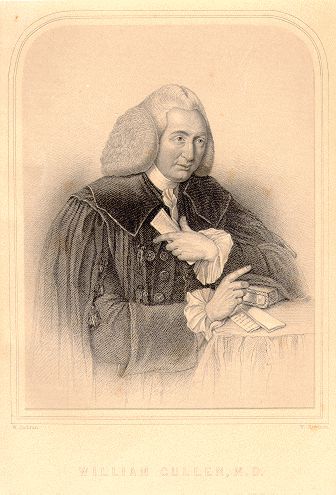 Senate Minutes (5 January 1747)
"Mr. Dunlop having represented the necessity of having Chemie taught in this University, he proposed at the same time that the thirty pounds sterling of the Professor of Oriental Languages salary that was saved during the time he was abroad with whatever the University should think fit to add thereto might be allotted to the buying of the Necessary Apparatus for practical Lectures in Chemie and building furnaces etc. for the same. And the said proposal is to be considered in the University meeting the 28th of this month."

Senate Minutes (11 February 1747)
"Dr. Cullen and Mr. Carrick having attended the meeting and given their opinion about the Apparatus necessary for teaching Chemistry, the meeting being satisfied with the account they gave of it, Appoint the thirty pounds sterling of the salary of the Professor of Oriental Languages saved while Mr. Dunlop was abroad to be appropriated for purchasing the said Apparatus, as also twenty two pounds sterling out of the College revenues, that the sum of fifty two pounds may be made up for that use..."

Faculty Minutes (18 June 1747)
"The above named Committee are appointed to consider in what manner the Thirty pounds sterling saved of the Professor of Oriental Languages salary while Mr. Dunlop was abroad, can be raised so as to be payed before the College rises to Dr. Cullen and Mr. Carrick for the building of a Laboratory and purchasing vessels etc. for teaching Chemistry to which use it had been appropriated by the University meeting the 11th of February last."

Faculty Minutes (25 June 1747)
"The committee appointed 18th June having observed that the thirty pounds sterling of the vacant salary of the Professor of Oriental Languages is payable out of Crop 1744 and therefore cannot presently be raised; and that it is necessary that a sum be issued to Doctor Cullen and Mr. Carrick before the rising of the College for the purposes mentioned in the Act of 18th June last; The Faculty appoint the twenty two pounds sterling allowed by the University meeting to be added to the forsaid thirty pounds sterl. to be payed to Dr. Cullen and Mr. Carrick. And a Precept was signed on Mr. Morthland to pay the said sum to them."

Senate Minutes (26 June 1749)
"Dr. Cullen having received about 2 years ago fifty two pounds sterling to be laid out in building furnaces and fitting up a Laboratory and purchasing the necessary vessels for it, it was now reported that he had upon the 21st current acquainted the Faculty of the success of this attempt to begin Chemical Lessons in the University, and the University meeting now return him thanks for the great care and pains he has been at in giving Chemical Lessons and explaining them constantly by the most useful and necessary Chemical Processes and Experiments. And the Doctor having represented that the above mentioned £52 had been all expended in building the Laboratory and buying the things that were spent in the Experiments and repairing the necessary waste of the glasses and other instruments, but that he had expended a much greater sum himself in purchasing cucurbits, boltheads and a great many other instruments. The University meeting Do hereby acknowledge that he has just right to these instruments and may dispose of and use them as he thinks fit."

Senate Minutes (1 November 1749)
"It was reported that Dr. Cullen designed to continue his Lessons in Chemistry providing the University would give him some allowance to support the necessary expence attending the making chemical experiments and processes, which report is to be considered next meeting."