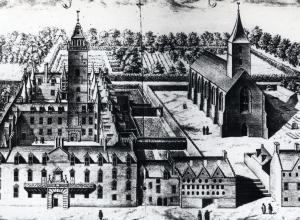 The University's original home was the College site just off the High Street in Glasgow - just down from where High Street station is today. When William Cullen was appointed as the first Chemistry lecturer, he set up a laboratory in the southern section of the east side of the quadrangle. His successor, Joseph Black, complained that this original laboratory was 'small and damp, that the floor had not been laid or the walls plastered', and that it was unsuitable for delivering lectures.

As a result, a new laboratory and lecture room was constructed at the cost of £500, within the College grounds, near the Physic Garden. The original laboratory was then converted into a Mathematics classroom.

The first ever chemistry laboratory on record that was designed specifically for undergraduate teaching was set up in Glasgow by Professor Thomas Thomson around 1820, in "a damp ground-floor room"  within the College which had previously been a Logic classroom.

[Interestingly, the first teaching laboratory in Physics is also credited to Glasgow, with Lord Kelvin setting one up in a disused College wine-cellar!]. 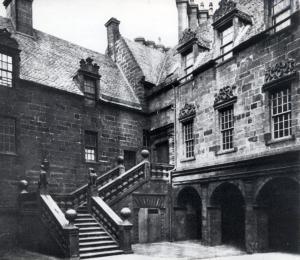 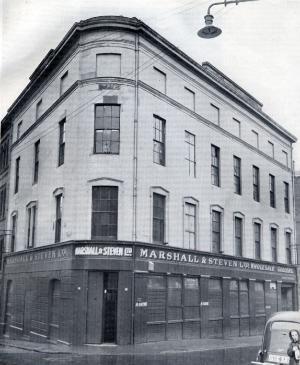 The laboratory provision in the Old College soon proved inadequate for a growing department, and in 1831 a building on the corner of Shuttle Street and College Street was acquired and fitted out at a cost of £5,000.

This four-storey corner-tenement style block had rented shops on the ground floor. A steep staircase gave access to the three upper floors. The first and second floors consisted of small rooms, presumably staff rooms or private laboratories. Lecture rooms were also present. The largest space was on the top floor, with the windows in the walls bricked up, but with a central glazed section in the roof providing plenty of illumination, additional large ventilators and a maze of gas-piping - this was the main teaching laboratory.

In 1870, Chemistry moved, along with the rest of the University, to the new site on the Gilmorehill Estate, in the west end of the city. The College site was sold to a railway company, the buildings demolished, and the land used for a vast goods yard.

The Shuttle street buildings survived long after the rest of the College had gone - they were used as warehouse and storage space for many years, and as late as 1956 evidence of their earlier use were still visible, in the shape of the ventilators and ageing gas-pipes in the roof-top laboratory. The building has since been demolished and the site sits empty. 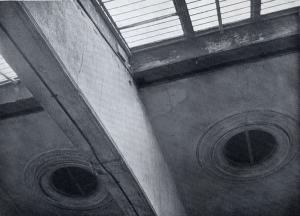 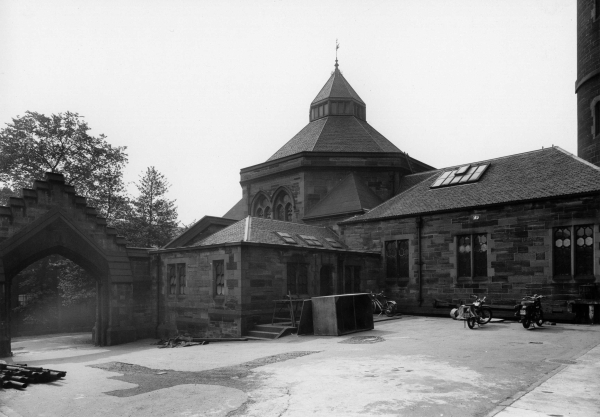 At Gilmorehill, lectures were held in the Easternmost lecture theatre of the main Gilbert Scott building. A laboratory was constructed nearby, a high-roofed octagonal building similar to one still standing in Oxford. Known as the Abbot's Kitchen, this soon proved too small, and was extended by a series of outbuildings in the early 1900s.

Although these were intended to be temporary, they were still standing (held up by a series of wooden buttresses!) in the 1930s, when the need for a modern, dedicated building became increasingly pressing.

The James Watt (Engineering) buildings now stand on the site of the Abbot's Kitchen and the other chemistry buildings. 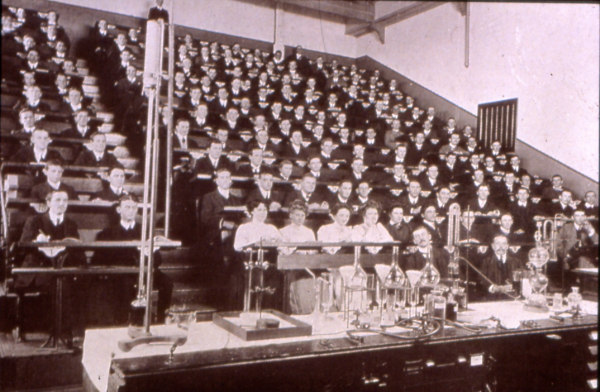 The University Senate approved plans for a dedicated Chemistry building in 1936, at the projected cost of £200,000.
The selected design was drawn up by T Harold Hughes and DSR Waugh. Hughes was Professor of Architecture at Glasgow School of Art at the time, and also designed the Round Reading Room on University Avenue.

The resulting chemistry building was a striking modernist design - the first building on campus to be built of brick rather than of stone. The narrow yellow brick covered a concrete substructure, designed to allow for future extensions and additional stories to be added at a later date. The exterior was broken up with large steel-framed windows, and featured dramatic tall curved glass stairwells to the rear. Twin re-entrant doorways formed an integral feature of this unusual butterfly plan building. A special system of foundations were employed to eliminate vibration from nearby University Avenue.
Only two of the planned three wings were finished when construction ceased at the outbreak of war in 1939, but even so it was described as "the finest and best-equipped department in the UK at that time."

At the time of construction, it was also the largest purpose-built chemistry establishment in the UK, extending to over 44,000 square feet. The building incorporated several novel features, including a large central store, a 400-seat lecture theatre with projection facilities, and special isolated laboratories for dangerous experiments. A dedicated library held the University library's chemistry collection, and a small suite of private rooms, including bedroom and kitchen, was designed to allow the most dedicated scientists to work on throughout the night. Recognising the quality of the building, a large portion of it was promptly requisitioned 'for research purposes' by the Admiralty during the war.

1948 saw construction finally begin on the third and final wing of the building, but this was not completed until 1954 - a delay caused not least by the discovery of disused mine workings [see below] when the foundations were being sunk. These completion works were done by the architects Alexander Wright and  Kay, very much to the original plans of Hughes and Waugh. The completed building was formally inaugurated on 19th March 1954, by Mr James Stuart, the then Secretary of State for Scotland. 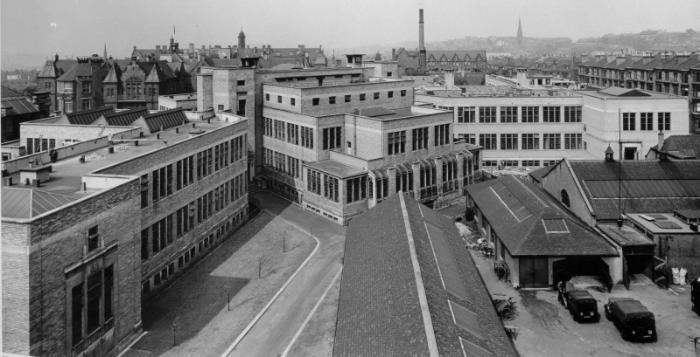 By the 1960s, further expansion was required, and an additional floor in timber was added, over the organic wing, and part of the inorganic wing, from 1963-66. A reading room extension to the department library was created in 1982, thanks to a bequest from the estate of George Lean.

In 1985, the building was 'A'-listed by Historic Scotland, giving formal recognition to its international architectural significance.

After nearly 30 years of heavy use, much of the building was extensively re-furbished in the 1980s to better reflect the research and teaching needs of the time. This work started in 1986, and was not completed until 1993, during which time the building remained open for teaching and research. Renamed the Joseph Black Building in 1997, further refurbishments of the main lecture theatres, and most of the laboratories, took place in 2004-2006, creating a modern, hi-tech department within a landmark historic building.

Then and Now: A selection of photographs of the department taken in 1954, and the same views today can be seen here. 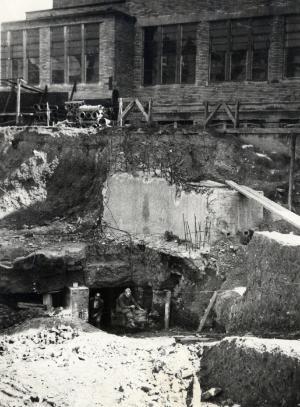 One of the most infamous features of the Joseph Black building is that it is built on top of a mine. Much of the west end of Glasgow is riddled with old coal mine-workings, and the area round the University is no exception. Shortly after construction had begun on the third wing in 1948, a newly built section of wall collapsed, and upon investigation a hole was found - luckily this occurred early in the construction process. The civil engineers JWH Ross & Co investigated the site, and discovered the entrance to old coal workings coming to the surface at that point. Much of the workings were then bricked up, but two sloping runways and several side corridors were left intact. A large fan was placed in one runway to control ventilation - the huge exhaust grill from this can be seen next to one of the main entrances to the building. A plaque was installed inside the mine in August 1950 to commemorate the completion of the underpinning works, allowing construction of the rest of the building to be completed.
For maintenance reasons, the mine is still accessible today from an entrance in the sub-basement of the building, and until fairly recently was the subject of field trips from the Geology department. 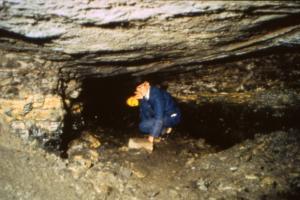 An unusual feature of the exterior of the building facing the Graham Kerr (Zoology) building is a delicate incised frieze on the origin of species.
Rumour has it that this was done to placate a Professor of Zoology, the view from whose office windows was going to be blocked when the new building was constructed.
His response upon seeing the frieze is sadly unrecorded.