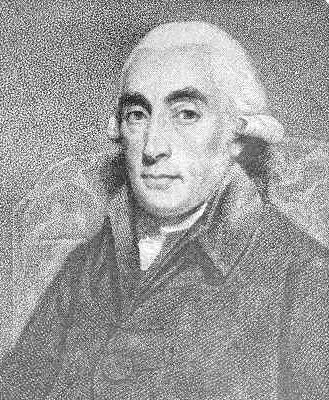 1728 - 1799
Noted for his fundamental work on latent and specific heats and for his discovery of carbon dioxide. This is a brief biographical sketch, extracted from local sources.

His life...
Joseph Black was born in Bordeaux on 16 April 1728, one of fifteen children. His father was John Black, an Ulster wine merchant of Scots descent based in Bordeaux (presumably for obvious reasons), and his long-suffering mother, Margaret Black, was from Aberdeenshire (also a member of a wine-trading family). When he was twelve, young Joseph was sent off to school in Belfast to learn Latin and Greek, and subsequently, aged 16, enrolled at Glasgow University in 1744 to study arts. After four years of this, his father persuaded Joseph to take up something more useful, so he chose medicine. The professor of medicine in Glasgow at this time was William Cullen who, the year before (1747), had instituted the first lectures in Chemistry.

Black wrote later: "Dr Cullen about this time began also to give lectures in chemistry which had never been taught in the University of Glasgow and finding that I might be usefull to him in that Undertaking he employed me as his assistant in the laboratory".1
Black moved to Edinburgh in 1752 to further his medical studies, but returned to Glasgow in 1756 as Professor of Anatomy and Botany, and Lecturer in Chemistry, when William Cullen was appointed Professor of Medicine in Edinburgh. The following year, Black was appointed Professor of Medicine in Glasgow (actually, he arranged to "exchange" chairs with the professor of medicine because he didn't feel competent to teach anatomy or botany). He remained in Glasgow until 1766 when he succeeded Cullen to the chemistry and medicine chairs in Edinburgh.

He never married, though it appears that he was "of a gentle and pleasing countenance", was popular with the ladies, and "performed on the flute with great taste and feeling". Black was a great frequenter of clubs, usually suitable for "highly respectable literary gentlemen", though it was apparently not unknown for him and his companions (who included Adam Smith, David Hume, Alexander Carlyle, James Hutton, amongst other celebrities of the time) occasionally, and accidentally, to visit less salubrious premises.

His research...
It is during the early Glasgow years (1750-52) that it seems Black began his work on the chemistry of "magnesia alba" (a basic magnesium carbonate), which he later submitted for his MD thesis in Edinburgh, and which includes the discovery of what we now call carbon dioxide - he called it "fixed air". These experiments involved the very first careful gravimetric (weight) measurements on changes brought about when heating magnesia alba (with release of CO2) and reacting the products with acids or alkalis. This foreshadowed Lavoisier's work, and laid the foundation for modern chemistry. (Because this work was submitted for a medical degree, Black also felt obliged to include a section on magnesia alba as a purgative and antacid.)

On returning to Glasgow as professor in 1756, Black met up with James Watt (of steam engine fame - then "mathematical instrument maker to the University"), and this seems to have stimulated the next phase of his work involving the concept of latent heat, and the first steps in calorimetry. Here again, it was the quantitative aspects of his work which led to his discoveries, particularly in the careful measurement of heat. "He waited with impatience for the winter" 1 in Glasgow so that he could do experiments on the freezing and melting of water and water/alcohol mixtures that led to the concept of latent heat of fusion. He did similar work establishing the idea of latent heats of vaporization, leading to the general concept of heat capacity or specific heat. These early steps in thermodynamics went on alongside James Watt's developments of improved steam engines, and the two were in constant communication.

His teaching...
Joseph Black was a popular and effective teacher, and many examples of notes from his lectures still survive. Most of his Glasgow students followed him to Edinburgh when he moved there in 1766. He was noted for his lecture-demonstrations, many of them based on his latest and ongoing researches on magnesia alba and heat effects. Typically he lectured five times a week, about 128 lectures in all, from November to May each year, attracting students from across Europe and America. The fact that his Edinburgh chemistry job was unsalaried, with income derived from student fees, probably provided reasonable incentive for him to make his lectures popular !

His day job...
And while all this was going on, outside the University he was known as Dr. Black, the eminent medic "much employed as an able and most attentive physician". Amongst his patients were David Hume (the famous philosopher) and the first nurse of the juvenile Walter Scott. The latter was diagnosed with consumption (tuberculosis) and subsequently sacked from the job, lest she infect young Scott.

His end...
Black himself was never particularly healthy, suffering lung problems from childhood infections, and rheumatic problems in later life. Unusually maybe for those days, he became a vegetarian in later life and seemed to suffer from vitamin D deficiency until he moved house to the country, where the milk from grass-fed, "free range" cows contained more vitamin D than those raised in dark cow-byres in the city. He died, in Edinburgh, on 6 December 1799, and is buried in Greyfriars churchyard.