The University was founded in 1451 and celebrated its 550th anniversary in 2001.
Chemistry at Glasgow started in 1747, and the then Department held its 250th birthday party in 1997. 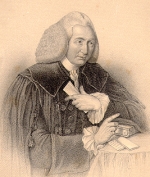 In 1747, just one year after the Battle of Culloden, the University found itself with a surplus of £30 saved from the salary of a new Professor of Oriental Languages who had yet to take up his appointment. William Cullen, later to become Professor of Medicine in the University, had been pressing Faculty and Senate for funds to equip a laboratory for the teaching of Chemistry as part of his reorganisation of the Medical Faculty.

He was granted this sum, together with a further £22 later that year, and the first lectureship in chemistry was established. It appears that his lectures and practical demonstrations were very popular, though he was later to complain "...that he had expended a much greater sum himself in purchasing cucurbits, boltheads and a great many other instruments..." (Senate minutes, June 1749).

More on Cullen from the Senate Minutes can be found here. 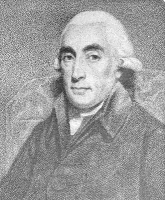 Cullen was succeeded in 1756 by his pupil, Joseph Black, already famous for his Edinburgh thesis on Magnesia Alba.

In 1762 Black announced from Glasgow his doctrine of Latent Heat. One interested person was the youthful James Watt who first measured, in the Department, the latent heat of steam. Chemistry at Glasgow thus played a notable role in the Industrial Revolution.

Black's pupil, Charles Hope, gave in 1787 the first Chemistry course in a British university based on the revolutionary ideas of  Lavoisier, whose laboratory he had attended in Paris.

A list of the contents of the chemistry laboratory from this period can be seen here.

The Chemistry lectureship was enlarged to a Regius chair in 1819.

The first professor, Thomas Thomson, a staunch supporter of Dalton's new atomic theory, set up the first University course in practical chemistry for undergraduates and built the once famous Shuttle Street laboratory off High Street in Glasgow in 1831 [see Glasgow Chemistry Buildings]. His "History of Chemistry" (1831) enhanced greatly the status of chemistry as a profession.

At this time the Scottish Universities, particularly Glasgow and Edinburgh, provided a high proportion of the leading chemists in the UK and the Empire. The Chemical Society, founded in 1841, chose Glasgow graduate Thomas Graham as its first president. Since then many other Glasgow graduates have held this position and have thus headed the profession. Two Glasgow graduates, Sir William Ramsay and Lord Todd, have been awarded the Nobel Prize in Chemistry, and two of our former staff, Frederick Soddy  and Sir Derek Barton, have also gained this supreme award.


In 1953, Henry How (assistant to Thomas Anderson) conceived the idea of functional group modification in natural products (making the quaternary ammonium salt of morphine) and thereby "... unwittingly set in motion a sequence of events which ultimately transformed the process of drug discovery" (Walter Sneader, Drug Discovery: the evolution of modern medicines, Wiley, 1985).

The Department as we know it began to take shape about 1900, when the sections of organic and physical chemistry (the Gardiner chair) were added.

From 1904-14 Frederick Soddy was the Lecturer in Physical Chemistry.

During this time he did the work for which he was awarded the 1921 Nobel Prize in Chemistry "for his contributions to our knowledge of the chemistry of radioactive substances, and his investigations into the origin and nature of isotopes".

The Department has consistently contributed to the advancement of chemical knowledge. For example, the elements strontium (Hope, 1792) and protactinium (Soddy and Cranston, 1918) were discovered by research conducted largely at Glasgow. Soddy published in Nature his hypothesis of the isotope and gave a clear definition of atomic number.

The Gardiner Professor of Chemistry from 1942-70 was J. Monteith Robertson (1900-1989), a pioneer in the field of X-ray crystallography and the founder of organic crystallography.

He developed heavy-atom and isomorphous-replacement techniques upon which so much of modern X-ray crystallography depends, including the 1995 determination here of the structure of the light harvesting protein complex.

In 1945 the department academic staff consisted of two Professors and seventeen Lecturers.

1957 saw the installation in the basement of Chemistry of the University's first computer - the English Electric DEUCE, which was soon put to work solving crystal structures, making Chemistry by far the heaviest user of the machine.

Theoretical chemistry was formally introduced in 1962 and the (Ramsay) chair in inorganic chemistry was instituted in 1968. The Joseph Black chair in Protein Crystallography was added in 1989.

Sir Derek Barton was Regius Professor from 1955-57, and in 1969 received the Nobel Prize in Chemistry (with O. Hassel) "for their contributions to the development of the concept of conformation and its application in chemistry".

In 2010, the Department of Chemistry was renamed the School of Chemistry, but its long and proud history continues...