My lab designs synthetic transport modules in cyanobacteria and plants for applications in water desalination, sensor technology and sustainable agriculture.

Scientists and engineers from Glasgow, Sheffield, Newcastle, Robert Gordon (Aberdeen) and Imperial College London are carrying out a large, EPSRC-funded, multi-disciplinary project with the title ‘Bio-desalination: from cell to tap’. The project led by Dr. Amtmann (MCSB) develops innovative desalination technology based on biological processes.

In principle, salt is toxic to all living cells but marine organisms have developed means to actively export the salt from their bodies. The basic idea of the project is simple; grow a large volume of marine photosynthetic microorganisms, then switch off of the endogenous salt export and use the cells as ion exchangers extracting the salt from the surrounding seawater. Its realisation poses enormous challenges to biologists and engineers but has been made possible through experimental tools developed over recent years in molecular and synthetic biology.

To build the synthetic ion-exchanger unit the Amtmann group ‘mixes and matches’ membrane proteins evolved by different organisms to work as sunlight-driven pumps and ion channels. The synthetic salt accumulator is then expressed in the biological chassis (e.g. cyanobacteria) under the control of a biological switch that can be triggered at a given time point in the process. The engineers in the team manipulate the surface properties of the synthetic cells in such a way that the cells float, sink or coagulate, and based on these properties they construct a process that continuously removes salt-saturated cells from the water. The beauty of the system is that it directly uses solar energy via photosynthesis and light-sensitive retinal proteins, and that its waste product (biomass) can directly be used to produce biofuel, biopharmaceuticals or biocosmetics. 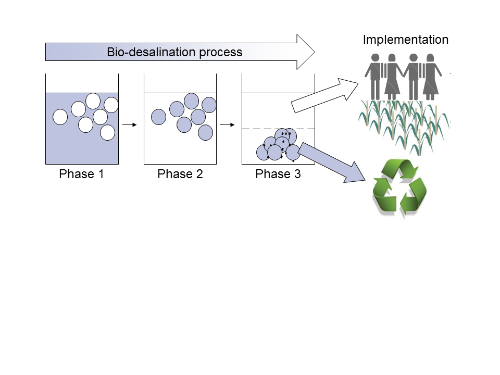