‌Site-specific recombination by serine integrases functions to integrate bacteriophage DNA into the host genome. Recombination is highly directional, and this directionality can be reversed by the addition of a specific recombination directionality factor (RDF). We have developed a new method based on serine integrase directional recombination to assemble multiple PCR products in a defined order and insert them into a plasmid vector to form functional metabolic pathways. The process is highly efficient, allowing production of large combinatorial libraries that can be used to optimise pathway production. Gene assemblies can be easily modified by further recombination reactions to bring about gene replacement or addition.

‌We are also using serine integrases for digital information storage. Recombination between two sites in a head-to-head orientation in a DNA molecule flips the orientation of the DNA between the two sites. The two possible orientations can be thought of as representing a single binary digit (0 or 1) heritably stored in the DNA, and the DNA state can easily be detected by physical means or can switch the expression of a reporter gene such as GFP. We are now working towards binary counters that could record the number of times the cell is exposed to a specific environmental signal, or to step through a programmed cycle of gene expression patterns.

Cut and paste DNA transposition can be used to deliver genes to random genomic locations in a wide variety of organisms and has potential for gene therapy. However, mutagenesis caused by random insertions is potentially harmful. To help overcome this problem, we have shown how transposition can be targeted to specific DNA sites by fusing the transposase protein to zinc finger DNA binding domains.

‌Site-specific recombination changes the topology of DNA, producing knots and multiply linked DNA circles as products. These topological changes can provide important information about the mechanism and regulation of recombination. We are now working on a more general topological tool-kit that can tell us about the path of DNA in protein DNA complexes such as those involved in transcriptional regulation, or the chromatin structures used to pack large amounts of DNA into the small space of the eukaryotic nucleus. 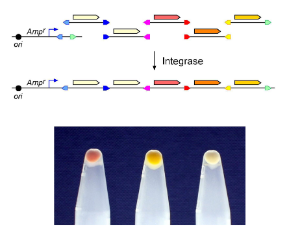 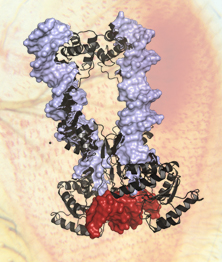 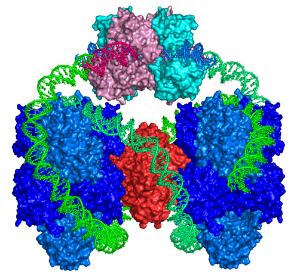