We are interested in the development of functional interfaces and integrated microfluidic devices for the investigation of microscale phenomena in biology. Working closely with synthetic biologists, a current focus is the development of an integrated artificial system with higher functionalities. Specifically, we are developing a semi-biotic immune device that will use a consortium of engineered bacteria — composed of a group of detectors that monitor the host for signals of disease onset and responders that await signals from the detecting bacteria — that triggers the production and release of a targeted small-molecule treatment.

The project aims to design and fabricate a semi-biotic immune system capable of monitoring, detecting and responding to multiple possible disease state signals. The device will use a consortium of engineered bacteria for designated functions that will be interfaced with the non-biotic components. In approaching this long-term goal, it is hoped this will move the field of synthetic biology forward towards integrated systems with high-level functionalities. Specific focuses of my group include the development of an integrated platform (e.g microfluidics, interfaces, and electronic sensors) to realize and validate the functionalities of the bacterial consortium within the device. For example, we have developed an integrated Microfluidic-Raman system enabling continuous sorting of single bacteria based on their Raman signals (figure 1). 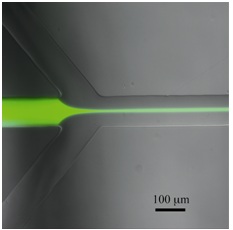 Fig. 1 Individual bacteria are confined in the middle of the channel (illustrated by green fluorescence) for Raman detection, and subsequently diverted to different channels based on their Raman signals (see video below)

Generation of a large family of genetic logic gates for applications in biosensing and information processing.

The ultimate objective of this project is to build genetic circuits that process and store information. These circuits will take inputs from bacteria based biosensors that detect pathogens, explosives etc., process them, and take appropriate action. Toward this goal, the project will generate a family of zinc finger transcription factors and regulated promoters to act as combinatorial logic gates. The output of these logic gates can be different fluorescence signals. To evaluate these genetic circuits, we will employ an integrated microfluidic - arrayed waveguide grating (AWG) device that is capable of simultaneous quantification of multiple wavelengths (figure 2). The small footprint of this device will permit easy integration with additional modules, and provides a promising route to stand-alone novel biological sensors for field applications. 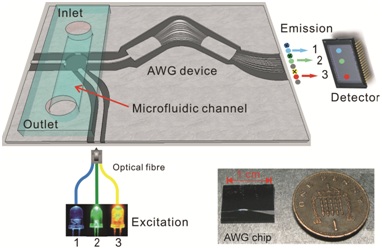 Fig. 2 Schematic showing the integrated microfluidic-AWG approach for quantification of multiple outputs from bacteria cells in the detection window