Samoa's Ark and Other Tales of Polynesia 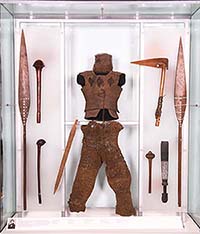 What can we learn about Samoa from a nineteenth-century Scotsman?

‌To respond to that question, my Hunterian project creates a network of narratives that use a literary style often used in music, call and response—typically found in a chorus responding to the lead singer. This technique can be a way of layering a story—and I use it to layer the world built by Rev. George Turner’s written accounts of his missionary work in Polynesia.

‌Rev George Turner—medical doctor, missionary, University of Glasgow graduate and native of Irvine, Ayrshire—traveled throughout Polynesia in the mid-nineteenth century, writing extensively about his interactions with the people and culture of Samoa as he saw them—covering medical issues, such as the longevity of the Samoans, and religious issues, such as burial customs. Along with a Samoan translation of the Bible, he wrote two books on local rituals and beliefs—Nineteen Years in Polynesia: Missionary Life, Travels, and Researches in the Islands of the Pacific and Samoa: A Hundred Years Ago and Long Before. Turner also sent artifacts back to Scotland, some of which are housed in The Hunterian Museum main hall.

‌All of this work deals with representations of the new and unfamiliar world he found in Samoa as seen through the eyes of a nineteenth-century Scottish missionary. Turner’s choices of what to include and what to leave out of the stories he tells allowed him to rebuild that world for his readers.

My Hunterian project sits on one of the tabs in my thesis website—by clicking the tab for Samoa’s Ark, the world of the story opens up, and from there you will find more tabs and places to click into with more stories to explore. All the tales feature a call and response through the built in links, and every linked story is centered around the original—Samoa’s Ark. In the tale, the Ark is the armour from The Hunterian Museum’s Turner Family display. It carries the spirits of Samoa and its people—mirroring, calling and responding to one another and to Rev Turner.

Dana’s thesis, Factions, is a hypertext fiction website examining acts of worldbuilding on social media platforms. The thesis website—narrated and curated by an AI mystic named Wu—explores how facts and fictions merge to form new worlds in the realm of social media.

Visit  danallittle.com to find out more.

Images
Top: Collection of objects held by The Hunterian—clubs, baton, staff, bugle-flute, bag, and vest—E 438, on display in the museum's Main Hall.
Above: