Alcohol in the Archives: Temperance collections in Archives and Special Collections 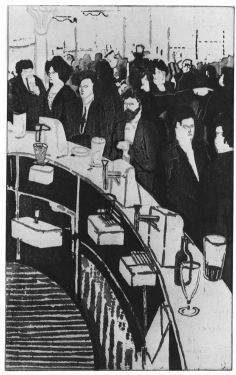 Have you ever considered exploring debates about alcohol through creative writing?

The ‘Alcohol in the Archives’ project invites creative writers to engage with a range of objects, artworks and documents related to alcohol and the Scottish temperance movement. These artefacts come from the University of Glasgow’s Archives and Special Collections and The Hunterian.

Alcohol features prominently in many Scottish novels and poems, from the works of Robert Burns and Hugh MacDiarmid, to Alasdair Gray and A.L. Kennedy. Ongoing debates about the role of alcohol in Scottish society and individual lives, such as minimum unit pricing and movements like Dry January, prompt people to rethink their relationship with alcohol. This makes the topic one of continued interest for creative writers. Glasgow was home to much of the Scottish temperance movements in the nineteenth and twentieth centuries (such as the Scottish Temperance League, founded in the city in 1844), making it an ideal place to reflect on alcohol in Scotland.

In response to my research, I held a creative writing workshop in November 2020 as part of the Being Human Festival, using material found in the UofG Archives and in the Hunterian collections as writing and thinking prompts. You can read the result of this workshop in the Alcohol in the Archives Journal featuring poetry and prose inspired by these fascinating and intriguing artefacts. 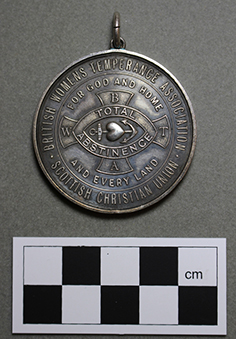 The journal is divided into four sections, bringing together poems and stories inspired by each of four featured artefacts. The first is a 1975 artwork called ‘Drinking Scene’ by Donald MacKenzie, depicting a busy pub. The second is a drinking glass in the shape of a thistle, with a repaired chip in the rim. Third is a temperance medal issued by the British Women’s Temperance Association Scottish Christian Union. Lastly, there is a temperance propaganda poster in form of a reward notice, plus the written rules of the Glasgow Total Abstinence Society from 1838.

Perhaps you would like to try your own creative writing – you could explore the objects listed on this page for inspiration. If you are happy to share any excerpts of your work on social media, use #AlcoholArchives and tag @hunterian and @_sspence

Fred Spence, PhD researcher in English literature / medical humanities
Fred's research examines stigmatised health issues in contemporary Scottish literature (1997-present), in the context of neoliberalism and the so-called ‘Glasgow Effect’ (the phenomenon of poor health and high mortality in Scotland, even after accounting for socioeconomic factors). It focuses on mental ill-health/madness, alcohol use/alcoholism, and obesity/fatness, as these are commonly (and negatively) associated with Scottish public health, and indeed Scottishness itself, in the press and popular culture. The research also considers newspaper articles published in Scotland, allowing for a richer understanding of the fiction’s relationship with its context.
Twitter: @_sspence