Whistler as Butterfly: Literary and intertextual relations in Whistler’s The Gentle Art of Making Enemies 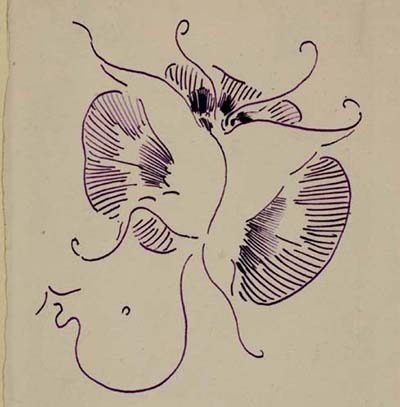 Throughout his life and work, American artist James McNeill Whistler (1834-1903) was absorbed by the imagery of butterflies. His famous signature integrated his initials ‘J’, ‘M’ and ‘W’ into a stylized come perky butterfly, figuring in the margins of a painting or etching, or even engraved on his silverware. Most prominently, however, might be how Whistler rather playfully arranged different configurations of his butterfly signature in his collected writings The Gentle Art of Making Enemies (1890), which is most famous as a response to his libel suit against the art critic John Ruskin.

This project explored the significance of Whistler’s butterfly signature in The Gentle Art as well as its capacity to perpetuate into his literary circle. With the unique and extensive holdings of the Whistler Collection at The Hunterian and the Special Collections at the University, interdisciplinary connections will be established to his poet friends Stéphane Mallarmé (1842-1898) and Comte Robert de Montesquiou-Fezensac (1855-1921) through poems, cards, sketches and objects.

Bio: Kristina Astrom is a PhD candidate in Comparative Literature at the University of Glasgow. Her research revolves around the late nineteenth-century French poet Stéphane Mallarmé as well as his friend, painter James McNeill Whistler. She is particularly interested in the different representations of liminal space in both their works which is manifested in the form of the paratext, spatial imagery, text/image relations and the interplay between different artistic media.