Pox and Prejudice? Syphilis and the Emotions in 18th Century Britain 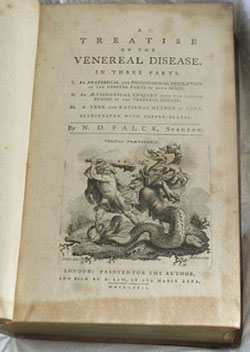 In 1495 a new pandemic swept across Europe; echoing his contemporaries’ fears Joseph Grünpeck, a German secretary, described it as a ‘terrifying, troublesome, and painful sickness’. Today identified as syphilis, this disease had come to stay. It reached Britain by 1497, and in the eighteenth century it continued to trouble all levels of society.

‌Syphilis and its victims provoked a huge range of emotions; they were stigmatised and satirised, but also the objects of pity and sympathy. Many sufferers lived in great pain and shame, yet for some men syphilis was a badge of honour recalling their success in the battlefield of romance.

Syphilis was known by many names, including the ‘French Disease’, the ‘Great Pox’ or simply ‘the Pox’, and it fascinated medical men.  William Hunter collected a number of skulls from syphilitics for his anatomical collection, whilst his brother, John, wrote one of the many medical treatises on the disease. 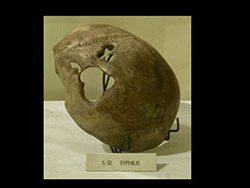 Working with the Syphilis Collection in Special Collections alongside the syphilis skulls in The Hunterian, this project investigates the emotional history of syphilis in eighteenth-century Britain. It explores how victims of the disease were perceived and how they perceived themselves. The collection’s texts provide a unique insight into the opinions of contemporary medical practitioners, whose works are laced with both medical and moral opinions. The skulls meanwhile raise important questions about the afterlives of syphilitics. Why did Hunter have these skulls? Did they simply represent useful teaching objects? Or did they provoke a fascination similar to that experienced toward the disease’s living victims?

Follow my blog addressing these questions and exploring the emotions evoked by syphilis during the eighteenth century. In addition I will be speaking about the project at a number of events, check the blog’s "Events" page for regular updates.

Mona O'Brien, PhD researcher in History.
Mona is researching the medical, social, and emotional histories of the French pox (syphilis) in Europe during the period 1495-1700, focussing in particular on Germany.  Mona's PhD is funded as a Leverhulme Trust "Collections" scholarship , and is a member of the Leverhulme-funded Collections programme Human Constellations.