Improvement and Scotland - an online exhibition

The Hunterian is proud of its legacy as an ‘Enlightenment Collection’.  This project builds on that, exploring the cultural milieu of the eighteenth and early nineteenth centuries.  Examining a series of artworks alongside excerpts from literary texts, the online exhibition focusses on their shared preoccupations around issues of Scottish national identity.

Some of the best-known names in Scottish cultural history – including Burns, Scott and Wilkie – are addressed alongside lesser known writers and artists in an investigation of a critical historical moment that continues to inform modern culture.  Demonstrating the fundamental links between Enlightenment and Romanticism, it introduces how Scotland responded to the major historical transformation brought about by rapid economic development. 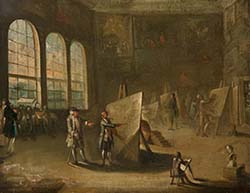 Taking the concept of ‘improvement’ as a central focus, the video presents a variety of attitudes towards, and responses to, this central political and cultural keyword.  Fundamentally an economic term, the ‘improving’ zeitgeist pervaded Scottish life, dominating areas like agriculture, language, gender and education.  Yet the drive for improvement was always challenged.  It provided a cohesive point around which a whole range of intellectual positions were located: from the most optimistic forecasts and celebrations of the march of ‘progress’, to deeply pessimistic attitudes towards the same.

Registering the dramatic experience of the nation, debates over improvement signal the pressures produced by modernisation and globalisation.  This focus captures a contested narrative that underpinned intellectual activity in a period often described as the ‘Age of Improvement’.  As the nation entered upon the modern era, powerful social, economic and political forces prompted a period of sustained national introspection – one with particular resonances for today, as we move towards the Independence referendum in 2014.

My research investigates the relationship between literary aesthetics and national politics in the eighteenth and early nineteenth centuries.  Using a range of significant writers, it builds a picture of how literature engaged with the contested status of Scottish nationhood.