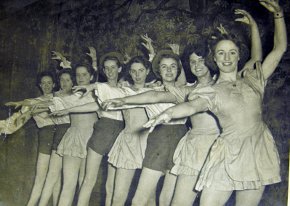 The national theatre of Scotland is pantomime.
– actor/director Lewis Casson, speaking in the 1920s

Beginning in October 2007 Pantomime in Scotland: ‘Your other national theatre’ was a three-year research project, funded by the Arts and Humanities Research Council (AHRC) that explored and celebrated all aspects of pantomime in Scotland.

The Pantomime in Scotland project was an opportunity to explore, document and enjoy one of Scotland’s great popular art forms. Recognising this, the project was both an academic investigation and a celebration of Scottish pantomime, its history, its current arrangements and impacts.

Part of our work was a nationally-organised oral history project to record people of all ages’ memories of going to see – and appearing in – pantomimes.

The project has produced a touring exhibition, a DVD of archive pantomime films, a national census of pantomime activity in Scotland in 2008/2009, and an economic impact study, which assesses pantomime’s contribution to both Scottish theatre and the wider economy.

Pantomime in Scotland was funded by the Arts and Humanities Research Council (AHRC), the UK body that supports academic research into all areas of the Humanities.

Who were our partners?

Partner organisations involved in different aspects of the project include: