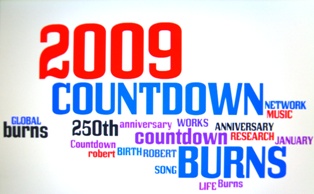 2009 was an exciting year! The 250th anniversary of Robert Burns's birth on the 25th of January prompted a great deal of exciting new research to be disseminated in new publications and at conferences worldwide, as well as numerous events celebrating Burns's life, his poetry and his song.

Below is a calender of events leading up to and including Burns 2009.