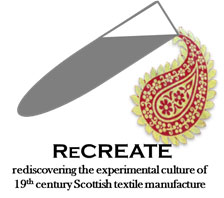 ReCREATE is a multidisciplinary research network to rediscover and reconnect the tools, materials, laboratory and workshop environments, manufacturing skills and experimental practice that Scotland used to make colourful decorative textiles in the Industrial Revolution.

Building on successes from the interdisciplinary knowledge exchange network ReINVENT, ReCREATE develops and strengthens links between academic and heritage sector researchers in the sciences, arts, and humanities through four innovative networking meetings where the collaborators examine and discuss historical materials, tools & equipment, textiles, and documents now in museums, archives and trusts.

Knowledge exchange between the collaborators and invited specialists from the UK and Europe will inform and inspire reconstructive research for making decorative textiles, and contextualise the international significance of Scotland’s experimental culture before and during the Industrial Revolution.

The network partners will ultimately share their expanded understanding through a public conference, and also scope collaborative research partnerships between the academic and heritage sectors to rediscover Scotland’s forgotten story of textile manufacturing innovation.

ReCREATE is an interdisciplinary network between thirteen active academics and practitioners in the arts, humanities, sciences and engineering from HEIs, museums, archives and heritage trusts who want to understand how decorative textiles were made and designed in 19th C Scotland.

The focus is the experimental culture involved in past textile manufacture production. Using historical collections in museums and archives to stimulate interdisciplinary discussion and knowledge sharing, the researchers aim to elucidate tacit and enhance known understanding for their use or production by

By revisiting perceptions and conceptions, a springboard for novel research for reconstructions and their interpretive application is anticipated.

The collaborators will meet at four networking events over a 12 month timeframe at Scottish museums, archives and trusts with accessible collections of relevant tools, equipment, products and working exhibits for decorative textile production in the 19th C:

Interdisciplinary examination and discussion between the collaborators will interrogate the historical collections to understand their use and purpose alongside the necessary resources and skills; the experimental and working environments in terms of temperature, light, humidity; practicalities of design and colour; and the interconnections between them all.

Relationships between collections will inform current reconstruction projects, while the process will identify gaps in evidence and knowledge to inform new research. Curatorial expertise in textiles, technology, tools, equipment and reconstructions for working exhibits ensures important and interesting relevant artefacts from collections are available for discussion.

Discussion will also revolve around experimental culture exchanges and knowledge transfer between countries, looking at skills and practices in innovation and production. It also aims to address questions around perception of colour and its reproduction including, for example colour-matching under different types of lighting in factories, the home and outdoors in 19th C Europe.

Each network meeting involves two or three invited specialists with expert knowledge in reconstruction, collections, manufacturing history and/or research interests in the materials, tools and equipment, design and products of 19th C European decorative textiles. The relationship between the historical experimental cultures and related industry practices in England, France, Germany and Switzerland are especially important, as are the interactions between innovators and experimentalists in dyeing, weaving and design, and the exchange (and non-exchange) of knowledge and practice that influenced and changed the global industry.

These are just some of the world-famous textile industries of 19th century Scotland. Today is it hard to imagine their global scale or local impact.

Why were these textiles so popular? How were they made? Who was involved? What changes did the Industrial Revolution bring? Why did production end? What has survived?

Rediscover the fascinating stories behind Scotland’s decorative textile heritage in our museums and archives through the unique ReCREATE network of curators, historians, designers, archivists and scientists.

At Paisley Museum and Art Galleries on Saturday 20th June, ReCREATE partners and others will show and tell how they are reconnecting these beautiful Scottish textiles with the tools, processes and people who made them.

• See magnificent weaving looms from the 1800’s in action
• Take a close look at companies’ designs and samples in century-old pattern books
• Compare the colours of natural dyes with the first synthetic ones
• Handle historical tools and textiles
• Hear about the lives of textile workers
• Find out why Paisley, Glasgow and the River Clyde were so important for textile makers
• Learn the skills of the calico printer
• Take a textile heritage walk through the streets of Paisley

Early career researchers (ECRs) in the ReCREATE network will meet with invited researchers in curatorial and conservation science from renowned institutions with historical collections relating to textile manufacture and design. The aim is to enable ECRs to find out more about these major collections to stimulate knowledge exchange that will benefit their current research and inspire new project ideas for the ECRs to develop. The PI and CI will facilitate the meeting to encourage ambitious and realistic projects.

It is anticipated that ReCREATE will also facilitate cross- disciplinary project links with the RSE hand-knitting project, the ‘Creative Scotland’ Harris tweed project, the Scottish Academy of Fashion, the Scottish industrial collections knowledge exchange network STICK and ‘A Creative Enlightenment’, an AHRC-funded career development programme for postgraduates in the arts and humanities to widen the scope for follow-on ReCREATE research.

This final meeting between the collaborators will capture and develop partnership research ideas stimulated by ReCREATE to scope projects for targeted research funding applications. Identified project leaders will facilitate proposals to be taken forward for grant applications after the network ends. Other legacy avenues for the network will also be explored, like cross- and interdisciplinary publications.

An exciting announcement from Kiara and Lesley in the University's Scottish Business Archive about a grant they have just been awarded for the textiles archives.

The UoG press release includes a statement from Dr Anita Quye and Dr Klaus Staubermann on its significance for ReCREATE.  See links below: