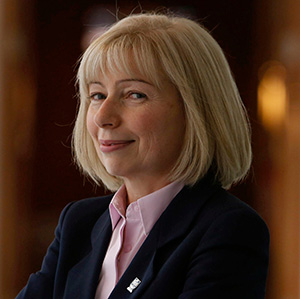 ‘At the University of Glasgow, we champion the importance of a precision medicine approach to health care where research and industry collaborators work closely together. We are proud to house the Precision Medicine Scotland Innovation Centre, an area that has been purpose built to bring world-leading research and innovative industry together.’

Professor Dame Anna Dominiczak DBE, MD, FRCP, FAHA, FRSE, FMedSci is Regius Professor of Medicine at the University of Glasgow. She is also an Honorary Consultant Physician and Non-Executive Member of NHS Greater Glasgow and Clyde Health Board; and Health Innovation Champion for the Medical Research Council.  In 2016, she was awarded a DBE for services to cardiovascular and medical science.

Recognised as a world-leading cardiovascular scientist and clinical academic, she held a British Heart Foundation Chair of Cardiovascular Medicine at University of Glasgow between 1997 and 2010, and directorship of the Cardiovascular Research Centre between 2000 and 2010.  Her major research interests are in hypertension, cardiovascular genomics and precision medicine, where she not only publishes extensively in top peer-reviewed journals (over 500 publications), but also excels in large scale research funding for programmes and infrastructure (with a total value in excess of £100M over the last eight years).

Professor Dominiczak is the driving force behind the fundraising, development and delivery of the University’s clinical academic campus at Queen Elizabeth University Hospital in Glasgow, comprising Clinical Research Facilities; a Teaching and Learning Centre; a state-of-the-art Imaging Centre of Excellence (including the UK’s first 7Tesla MRI scanner in a clinical setting); and a Clinical Innovation Zone. She leads a triple helix partnership between academia, the NHS and industry to accelerate innovation, maximise patient benefit and stimulate business growth, including a collaboration of four Scottish universities, four NHS Health Boards across Scotland and two major industry partners in a public/private partnership focused on precision medicine.

Professor Dominiczak has served extensively on national and international research committees and scientific advisory boards, including those of the Academy of Medical Sciences, the Royal Society of Edinburgh and the Max-Delbrück Centre for Molecular Medicine in Berlin.  From 2012 to 2015, she was Vice President, Life Sciences of the Royal Society of Edinburgh.  She is Chair of the Medical Research Council’s Translational Research Group and a member of the Medical Research Council’s Strategy Board, the Medical Schools Council’s Executive, the Academy of Medical Sciences’ Council and the Scientific Advisory Board of the Inserm Unit, George Pompidou European Hospital in Paris.  She is also a Trustee of British Heart Foundation.

Professor Dominiczak is a member of several editorial boards and, since 2012, has been Editor-in-Chief of Hypertension, journal of the American Heart Association and the world’s top journal in her area of research.