Philip Schlesinger, Professor in Cultural Policy, is interested in policy but not in a narrow sense: "I have an interest in how things work. It is a practical interest in how policy works itself out, but it’s much more than that. It has a very analytical, sociological dimension to it."

Professor Schlesinger’s many research interests are all interrelated and hugely topical: media and content regulation; national identity, culture and the economy; and the role that the state plays in setting the policy agenda and defining interventions.

Via the advisory roles that Professor Schlesinger holds, he is keen to explore how academic research can relate directly to user communities, including policymakers. He is particularly interested in exploring the value of the role of academics as experts. This is a topic that has generated extensive media coverage and sparked debate over the last two years. During the EU referendum debate and the US presidential elections doubt was cast over the role of experts in policymaking and, in some areas of policy, scepticism around the value of scientific evidence.

Professor Schlesinger is currently a member of Ofcom’s Content Board, the committee that sets and enforces standards for television and radio. Ofcom is the UK’s communications regulator and the Content Board is "charged with understanding, analysing and championing the voices and interest of the viewer, the listener and citizen." Professor Schlesinger sees this as an important area for academics to be involved: "I think this is rather a key role  as the regulation of content is something that affects everyone in the UK."

"As an established and well-respected academic in Scotland, Philip’s views on communications issues and ‘the politics’ are sought, valued and respected by Ofcom."
Former Director, Scotland, Ofcom

Professor Schlesinger has had a long-standing relationship with Ofcom. He joined the Advisory Committee for Scotland as a founding member in 2004 and he served as its chairman from 2009–2014. His research has regularly informed UK policy and planning related to the communications sector in Scotland. His research-informed expertise and policy insights have been highly valued by the Scottish Government, Scottish Parliament, Scotland Office and Ofcom.

Alongside his role as an advisor and committee member, Professor Schlesinger’s research has investigated institutions that are set up to deliver government policy. "I want to understand sociologically how these institutions operate and therefore understand the state in which we live and how you can read from looking at such an institution to the wider culture of the UK and Scotland."

This work has resulted in two pioneering books, both published in 2015: Curators of Cultural Enterprise and The Rise and Fall of the UK Film Council.

Curators of Cultural Enterprise was the product of a one-year ethnographic study of the Glasgow-based Cultural Enterprise Office (CEO). This is an agency mainly funded by Creative Scotland and the Scottish Government to support creative microbusinesses to survive and thrive.

The study was conducted at the Centre for Cultural Policy Research (CCPR) by Professor Schlesinger, Dr Melanie Selfe and Dr Ealasaid Munro. It sheds light on the complicated set of policy pressures that influences the delivery of CEO’s services. The team found that, irrespective of which party is in power, intervention in the Scottish creative economy has long been modelled on received wisdom produced by the policymakers, think tanks and academics working in London. The distinctiveness of the Scottish context has been too little considered north of the border.

The team’s research showed that local economic, social and cultural conditions really do matter when considering the effectiveness of intervention.

The Rise and Fall of the UK Film Council traces the fascinating history of this cultural support body and reflects on the lessons to be drawn from its experience.

For over a decade, until its closure in 2011, the UK Film Council (UKFC) was the key strategic body responsible for supporting film in the UK. The project, also carried out by a team at CCPR, was led by Professor Gillian Doyle who worked with Professor Schlesinger, Professor Raymond Boyle and Dr Lisa Kelly to investigate how and why the objectives pursued by the UKFC changed over time.

Drawing on interviews with leading film executives, politicians and industry stakeholders, the book provides a robust analysis of the rise and unexpected fall of the UKFC. As well as offering a critical overview of the political, policy and technological contexts which framed the organisation's creation, existence and eventual demise, the book provides a probing analysis of the tensions between national and global interests in an increasingly transnational film industry. It examines the objectives the UK Film Council pursued over time and suggests what lessons for strategic interventions in film policy can be drawn from the council's experience.

Professor Schlesinger is continuing with film policy analysis in his project "The New British Film Policy". This study is part of the Research Councils UK-funded CREATe programme on copyright and new business models in the creative economy.

The project has focused on the making and implementation of film policy since the closure of the UK Film Council in 2011. This research – centred on the role of the British Film Institute (BFI), which took up the UKFC’s role – will analyse the rationale and implementation of the new film policy set out in 2012. Professor Schlesinger is particularly interested in what film policymakers say they are doing and what they actually do. For instance, while the BFI is the main official instrument of policy for supporting film production, far more is actually spent in effect on various forms of tax relief for film production. So is film policy made at the Department for Culture, Media & Sport or perhaps more significantly at HM Treasury?

Another study, just concluded, is CuturalBase, a two-year project set up to create a social platform on cultural heritage and European identities. Professor Schlesinger has been lead partner in the Cultural Creativity Strand of this Horizon 2020-funded project.

Through research and policy development, and the creation of a social network of participants in the academic, policy and cultural fields, Culturebase was set up to inform and influence the European Commission's research agenda on cultural heritage, cultural memory and cultural creativity. There are strong indications that some key ideas have already been taken on board. 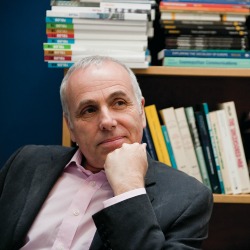 Following a long series of empirical studies, Professor Schlesinger is now intending to stand back and reflect further on the significance of his work to date and how it relates to emergent trends in the digital creative economy. He will develop this project during his forthcoming Robert Schuman Fellowship.

This award for distinguished scholars is made by invitation only and will run from March to June 2018. For four months Philip will be based at the Robert Schuman Centre for Advanced Studies (RSCAS), where he will work with colleagues on “digital culture and the future of the public sphere”.

He says: “The current turmoil in political communication, growing xenophobia, and present challenges to rational thought compel our attention. I’m delighted that the EUI has invited me to research these questions.”