A new understanding of the English language

The Historical Thesaurus of English has been described as "perhaps the single most significant tool ever devised for investigating semantic, social and intellectual history".

The Thesaurus is a unique resource charting the semantic development of the huge and varied vocabulary of English. The book and website consist of almost every recorded word in English from Anglo-Saxon times to the present day, all arranged into detailed hierarchies of meaning. It allows readers to understand not only which words were available to discuss any given concept at any given moment in the history of the English language, but also the full range and variety of words available to English speakers at that moment in time.

Resulting from a research programme that began at Glasgow in 1965, the Thesaurus was first published in 2009 and is now in its fifth updated version. It is unique, both in its coverage and in its method; no other historical thesaurus of any language has ever been created. 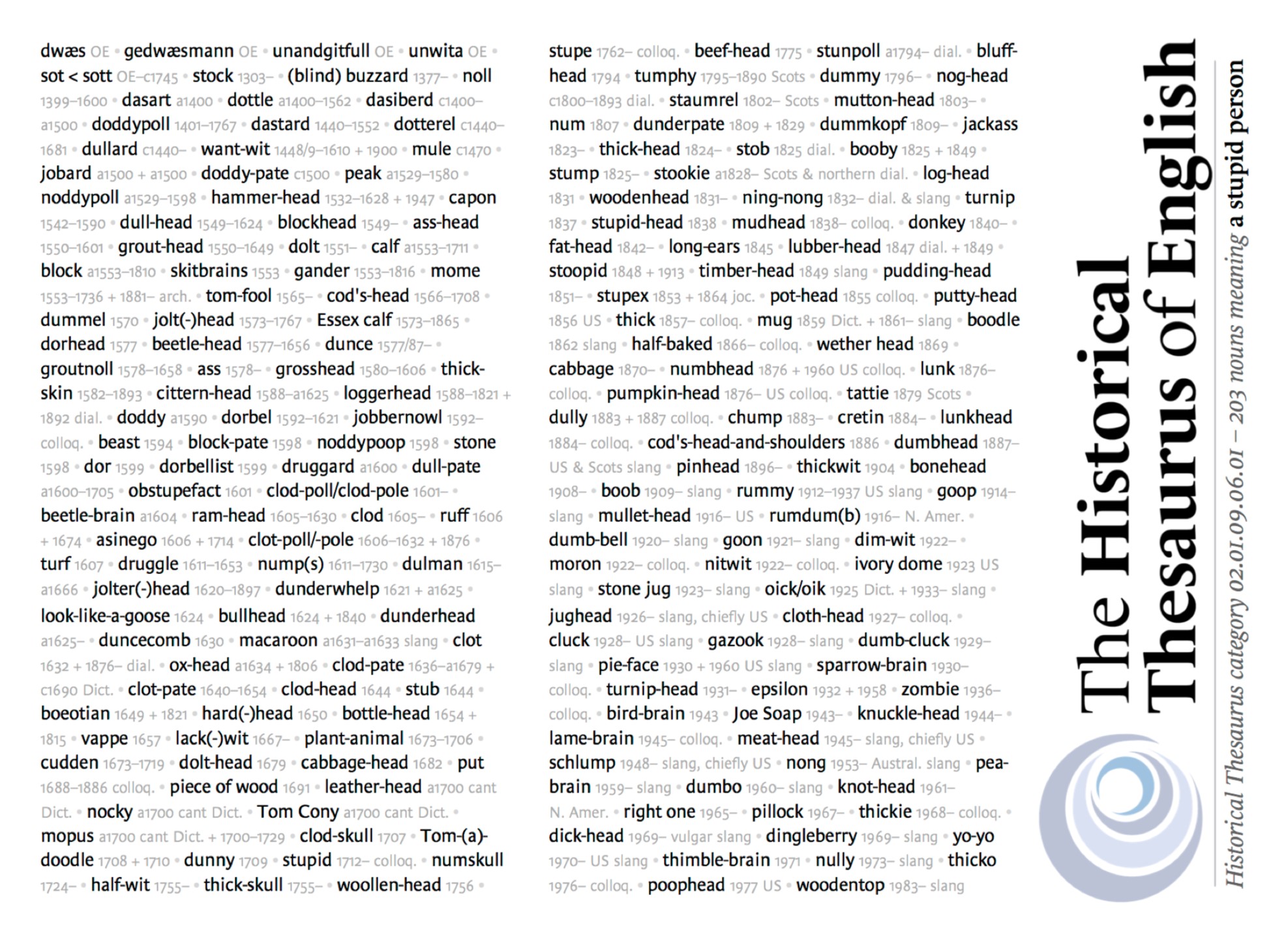 ‌Extract from the Historical Thesaurus

Michael Samuels, Professor of English Language at the University, first conceived the Thesaurus in the 1960s. The project was then carried out at the University from 1965 onwards, taking over 44 years to create the first edition, the work of over 230 people, taking approximately 320,000 person-hours to complete.

A second edition is in the pipeline, led by Marc Alexander, Professor of English Linguistics. Marc is the third Director of the Thesaurus, following Professor Michael Samuels and Professor Christian Kay. Having been part of the team for over a decade, Marc is now editing the second edition using new data and updating our evidence for the past using new digital methods.

In the eight years since publication its national and international impact has been substantial, including wide press coverage, integration into the Oxford English Dictionary online, royalty income funding student scholarships and prizes, and enthusiastic praise from writers, linguists, historians, and other scholars.

Named Book of the Year 2009 by the Guardian and The Times Literary Supplement, the publishers issued four print runs in the first three years. The Thesaurus has generated £1.9m from global sales for its publisher. This is an exceptional figure for a reference volume of this type, and confirming the significant contribution it has made not only to our knowledge of and appreciation for the historical development of the English language, but also to the publishing sector.

In 2017, the Thesaurus was awarded the highest accolade in higher education, a Queen’s Anniversary Prize for Higher Education.

The generosity of the editors has led to the award of 26 postgraduate scholarships over the last seven years. They signed over their copyrights to the University on the understanding that the royalties (exceeding £125,000 to date) would be dedicated to fund postgraduate scholarships. The scholarships are named in honour of the four original editors: Christian Kay, Jane Roberts, Michael Samuels and Irené Wotherspoon.

Recipients are talented early-career scholars who have produced theses on a wide range of topics, such as the representation of mental health in newspaper articles, the language of early modern Scottish law courts, the concept of anger in Old English, English and economic development in modern Malawi, grammatical choices in medical autobiographies, and more.

In addition to these awards, a large number of externally funded PhDs have come to Glasgow to study, primarily to have access to the Thesaurus’ database and the expertise of its staff. Additional royalties are funding a flagship yearly lecture series on the English language, as well as undergraduate prizes rewarding research excellence.