An Inquiry into the Nature and Causes of the Wealth of Nations
Adam Smith, Glasgow: 1805.
University of Glasgow Library, Sp Coll 81.d.10-13

The Wealth of Nations, as it is commonly known, was first published in London in 1776. This 1805 edition was published by Robert Chapman who was active in book and newspaper printing in Glasgow from 1788 to 1822. The Latin inscription indicates it was in use in teaching in Glasgow in 1817. The Government in London passed the Slave Trade Act in 1807 which outlawed the trade but not slavery itself. Enslaved peoples were finally emancipated on the island of Jamaica in 1838. 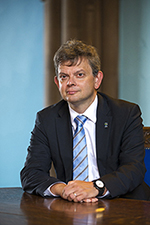 "Adam Smith’s The Wealth of Nations focuses on the fact that slavery makes no economic sense, and is a wickedness which stems from human nature and not from the laws of economics. This is echoed in his Theory of Moral Sentiments, where he attacks the character of those who trade on slavery. For Smith, societal issues were not just about economics but about the institutions which shape the wealth of nations and the wellbeing of its citizens: a message from the past we do well to remember today."