Photograph of Gilmorehill House (with the University main building under construction)
From The Old Country Houses of the Old Glasgow Gentry, 1870.
University of Glasgow Library, Sp Coll Dougan Add. 73

From 1802 to 1845, Gilmorehill House was the family home of prominent West India merchants who traded in tobacco from plantations in the West Indies and the United States of America. Enslaved people were forced to work on those plantations. They themselves had been traded in West Africa for Scottish products such as cloth. 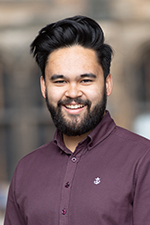 “This is a deep reminder that we shouldn’t shy away from the past and face up to the flaws in our history. Initially upon looking at this, it’s striking that this building was architecturally incredibly beautiful, but that thought is quickly followed by a profound sense of remorse knowing that I walk over the foundations of this building on a daily basis, knowing what it represents, what it embodies.”