This 146 foot long, three-masted iron sailing vessel known as the Jamaica was built on the Clyde in 1854 by William Simons & Co. In the 1860s, the company constructed blockade running vessels to assist wealthy Glasgow merchants evade the economic consequences of the American Civil War. The Jamaica was built for Stirling, Gordon & Co, West India Merchants, whose partners owned plantations in Jamaica. The family of one of the partners donated £3,000 towards the construction of the University buildings on Gilmorehill in the 1860s. 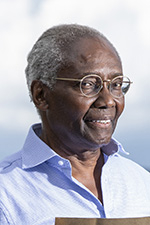 “This 1854 design of a Glasgow-built sailing vessel, named Jamaica, reminded me of Jamaica’s long historical links with Glasgow. Jamaica Street was opened in 1763 for trading in goods produced by chattel slaves in the West Indies. The Stirling and Dennistoun families made large fortunes from this cruel slavery. Although the history of this slavery cannot be changed, exhibitions such as this can enlighten and change the consequences.”