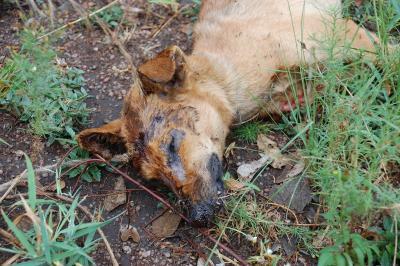 With the aim of appealing to the growing core of researchers at Glasgow working on different aspects of rabies dynamics we organized a workshop to discuss progress both in our own work and advances elsewhere, and how we can build on this for the future.

We were joined by researchers from the rabies unit at the Animal and Plant Health Agency (APHA) who serve as the reference laboratory for the World Organization for Animal Health (OIE) and are a World Health Organization (WHO) Collaborating Centre for Rabies Research and from the bioinformatics and spatial processes group at INRA, Avignon, France.

We spanned a range of scales in terms of transmission, techniques and species:

Kirstyn Brunker discussed her work on phylodynamics across continental scales in Africa, whilst Dan Horton from the University of Sussex provided an interesting contrast in the Middle East. Kirstyn also presented on dissecting more local landscape drivers of dispersal in collaboration with Philippe Lemey, whilst Samuel Soubeyrand looked at how genetics can help to identify individual pathways of transmission.

Nardus Mollentze presented on cross-species transmission including repeat epidemics of rabies in kudu in Southern Africa, in collaboration with Louis Nel from the Univeristy of Pretoria. Richard Orton provided interesting parallels from his work on another fast evolving pathogen, foot-and-mouth disease virus.

We finished with a global tour of rabies, literally from current global plans for canine rabies control from Sarah Cleaveland; a review of progress from large-scale control efforts in Tanzania from Katie Hampson; insights into the North American terrestrial wildlife rabies from Roman Biek and finally Daniel Streicker and Julio Benavides provided a great double act on the increasing problem of vampire bat rabies and where new opportunities might lie.

This was a great day for consolidating collaborations and thinking about new avenues and future work, as always benefiting from whisky fueled discussions (with particular contributions from Tony Fooks) in our local establishments.