Past and upcoming XR and partner events

In a world of rapidly changing technology and evolving visitors, how can visitor attractions and tourism businesses continue to successfully engage visitors and exceed their expectations? While creative uses of technology are increasingly important, people and skills also play vital roles.

This full day event, in partnership with Interface, the Knowledge Connection for Business, explores the impacts and uses of immersive technologies for visitor attraction and tourism audiences in the morning, and delivers an Exceeding Visitor Expectations session with ASVA in the afternoon.

Morning: Immersive Experiences and Audiences: Delegates will hear talks from academic and industry experts (from the University of Glasgow, Edinburgh Napier University and the Soluis Group) with practical tips to take away, opportunities for discussion, networking and trying out VR equipment:

Afternoon: Exceeding Visitor Expectations: Gordon Morrison, CEO of ASVA, will lead the highly popular workshop session on Exceeding Visitor Expectations, including an Industry Case Study from Hayley Shields, Quality Sales Manager, Historic Environment Scotland. The event includes a networking lunch and refreshments and delegates will have access to follow up information and resources for morning and afternoon sessions.

Murray Pittock FRSE is Pro Vice-Principal at the University of Glasgow. He chairs the Kelvin Hall project for the University and plays a leading role in the University’s interaction with the Creative and Cultural Industries internationally, most recently in organizing the Glasgow and Dublin: Creative Cities Summit in Ireland. His interests also include the Smart City concept historically and today, and he has spoken on this at New York University, Stanford, Berkeley and other institutions. He led the Scottish Heritage Partnership, and was Principal Investigator of the associated Audiences of the Future Award from UKRI. Outside the University, he is Scottish History adviser to the National Trust and has acted as adviser on exhibitions, acquisitions and displays to bodies such as the National Galleries and National Museums on multiple occasions and was an external assessor to the French government on museum education development in 2017. Murray has made around 1700 media appearances in 55 countries on culture, heritage, history and society; he is currently completing a study of Robert Burns and the Scottish Economy for the Scottish Government.

Professor Maria Economou is Professor in Museum Studies/Curator, a joint post at the University of Glasgow shared between Information Studies and the Hunterian Museum, where she is responsible for the Digital Strategy. She is an expert in Digital Heritage and is interested in the use of all forms of digital technology and new media in cultural heritage and museums. She co-ordinated the Scottish Network on Digital Cultural Resources Evaluation, funded by the Royal Society of Edinburgh (2015-16), is Primary Investigator in the EU H2020 EMOTIVE project on emotive virtual cultural experiences through personalized storytelling, the EU MCSA POEM Innovative Training Network on Participatory Memory Practices and Co-I in AHRC/ESRC-funded Scottish National Heritage Partnership (2018). Maria was previously Associate Professor, Museology and New Technologies at the University of the Aegean, where she directed the Museology Research Laboratory and worked at the University of Manchester and the Pitt Rivers Museum as Assistant Curator- Information Technology. She studied Archaeology and History of Art at the Aristotle University of Thessaloniki, Greece, carried out an MA in Museum Studies at the University of Leicester and a DPhil at the University of Oxford (with a scholarship from the Lambrakis Research Foundation, Athens).

Hayley Shields is Quality Sales Manager at Historic Environment Scotland, where she has developed a variety of roles over the last ten years. Hayley is focused on developing quality in tourism and motivating teams to drive improvements with a strong focus on the visitor experience. Hayley has implemented ASVA’s Exceeding Visitor Expectations programme across various teams at Historic Environment Scotland and is responsible for ensuring that the organisation’s service standards set out its aspirations to provide and maintain a high standard of service to visitors.

For over 10 years at Soluis, Alastair has overseen all commercial aspects of client projects to ensure that client expectations are exceeded. During this time, Soluis Group have grown into one of Europe’s leading creative organisations servicing many of the world’s leading architecture, real estate and construction clients. Notable projects have included the development of a virtual marketing suite for the new Tottenham Hotspur FC stadium and more recently Everton FC’s new stadium project as well as the provision of innovative visual engagement solutions for some of the world’s largest and most ambitious development ‘Giga Projects’ in Saudi Arabia. Closer to home, Soluis have presented the future vision for many of Scotland’s largest development and infrastructure projects across the public, commercial and residential sectors; and through their Soluis Heritage division are specialists at looking back as well as forward through their work with clients such as The British Museum and Historic Environment Scotland.

Tom started as a BT apprentice. BT paid for him to undertake part time study and he gained a place at Royal Holloway University of London studying a BSc in Computer Science and Management Studies. During his final year at University Tom founded a publishing company which launched two titles, The Lock a guide for Camden, and Sleaze Nation, a youth culture and style guide magazine that is considered influential. Tom spent much of the nineties launching digital projects that had short lives, DJing badly in the trendiest clubs in London and being a stereotypical Shoreditch type. He was eventually recruited by Urban Outfitters when they launched in Europe. He worked there for some time, started a family, left work and studied an MA in Digital Media at London Metropolitan University. Tom has worked in higher education for over 10 years; his first job was teaching HTML to prisoners who had never seen the Web.

Dr Neil McDonnell is a Lord Kelvin Adam Smith Fellow at the Centre for the Study of Perceptual Experience within the University of Glasgow. His work focuses on the research questions within philosophy, and beyond, concerning the new Immersive Technologies of Virtual and Augmented Reality (VR/AR). His academic background is in philosophy - particularly the philosophical issues around causation - and he earned his PhD jointly from the University of Glasgow and Macquarie University. He held postdoctoral research posts in Glasgow, and Hamburg, and a teaching post in Glasgow, before his appointment to the LKAS scheme in September 2017. Neil’s industry background is in 3D visualisation, and associated technologies. He was a commercial lead for The Soluis Group, and co-founded the software arm of the company, between 2005 and 2010. When he returned to academia, he continued to consult with Soluis (and subsequent start-up Sublime Digital) on product design and commercial strategy as the immersive tech revolution took hold. 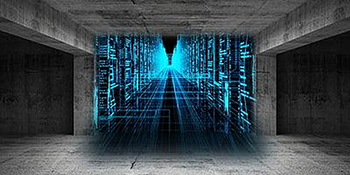 The Immersive Experiences Lab aims to grow a University of Glasgow community made up of researchers, artists, professionals and students interested in work at the intersection of arts and humanities, virtual and augmented reality, and related technologies.

EMOTIVE supports emotional storytelling, portraying complex characters in a variety of historic social settings, encouraging contemporary users to have an empathetic, deeper connection with them and understand aspects of their reality, which involves answering universal human needs and feeling emotions which transcend time.

An EMOTIVE experience combines several elements, ranging from simple audio-visual narrations to virtual representations and augmented reality applications, integrated in the context of a storyline, in order to stimulate a range of senses and make the visitor feel and act as a real inhabitant of a virtual environment.

The EMOTIVE project's final public demo event took place on 30th October 2019, at the Hunterian Museum at the University of Glasgow. It was a great day for the EMOTIVE team to get together once again as well as the public to finally be able to get a taste of the EMOTIVE tools and experiences. Weeks of intense preparations and hard work, and a lot of coffee made it a success! It was amazing to have all our partners from EXUS, the “ATHENA” Research Center in Information, Communication and Knowledge Technologies, Noho, University of York, University of Glasgow, Diginext, Inria and CNR-ISTI. 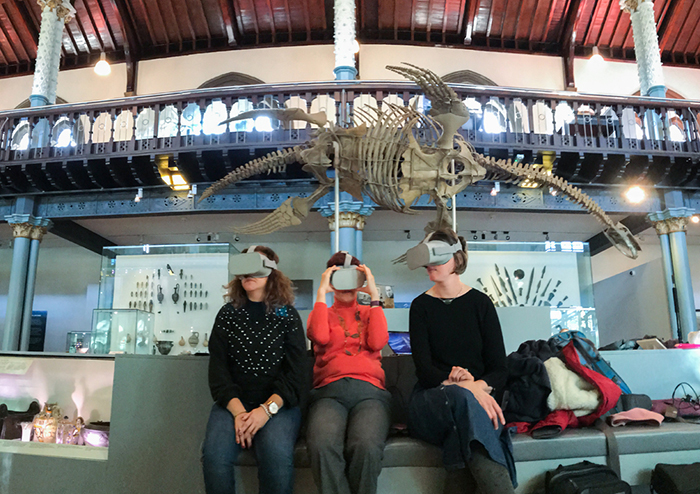 In the morning, the EMOTIVE team greeted a group of journalists for a private preview. It went very well and the journalists enjoyed the experiences too.

The public demo event on Wednesday welcomed over 100 professionals and researchers in interdisciplinary fields ranging from digital heritage, museology, user experience design, curatorship, digital engagement, immersive technologies, and interpretation. Together with the public who signed up for the event or were visiting The Hunterian for the day, the guests were invited to try out a range of the EMOTIVE experiences and prototypes created for two cultural sites: Çatalhöyük and the Antonine Wall and the related display at The Hunterian. 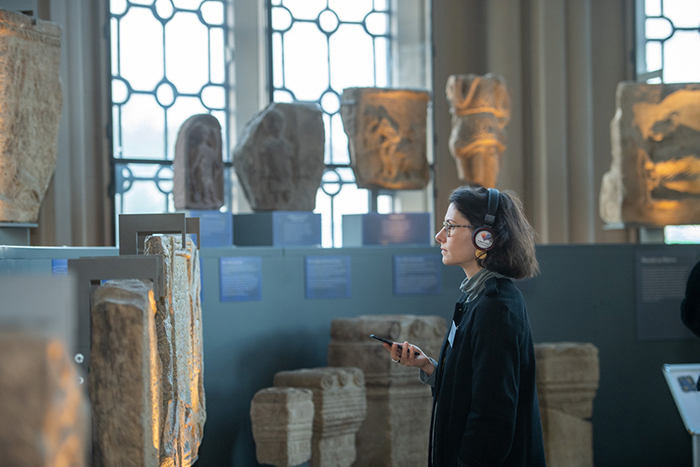 An hour after the demos started, there were a series of short welcome talks.The first was Steph Scholten, Director of The Hunterian, who welcomed all to Scotland’s oldest public museum and commented on the role of EMOTIVE in informing the museum's future audience engagement, collections interpretation and programming. The next speaker, Professor Murray Pittock, Pro Vice Principal for Special Projects at the University of Glasgow, welcomed all to the University and highlighted the importance of the EMOTIVE research and impact for the city of Glasgow, the Scottish economy and beyond. The third speaker, Hara Stefanou from EXUS Software Ltd and EMOTIVE Coordinator, gave a short introduction to the EMOTIVE project, followed by the fourth speaker, Professor Maria Economou, from Information Studies and The Hunterian at the University of Glasgow, who explained the experiences demonstrated and the schedule for the afternoon. 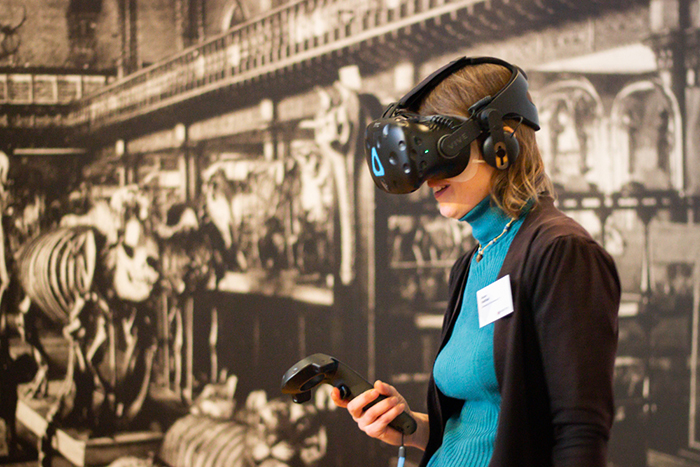 The Scottish Heritage partnership is a nine-month AHRC-funded initiative aiming to address the existing practice and future potential of immersive experiences and technologies in the collections and heritage industry in Scotland. Its key research question revolves around measuring the success of approaches to immersive technologies at major heritage sites in Scotland, both in terms of outcomes against business plan expectations and in terms of visitor response, and the kinds of future development supported by the evidence.

Immersive experiences are means of 'composing' memory (that is, creating the conditions in which the memories which are publicly expressed are those which are formulated within a range of socially acceptable contexts. In the motorized era, trails have fulfilled the same function of embedding preferred memory narratives, while immersive experiences-delivered in part or whole through the medium of technology-strive to present a fusion of memory, place and performance to create a close and lasting relationship of visitor memory to the experience purchased by the visit. Immersive technologies have (although research on this is not yet developed and its development is a key component of the proposed partnership) arguably similar effects to electronic mass media in the composure of memory, but effects which are possibly delivered in stronger and more lasting terms. 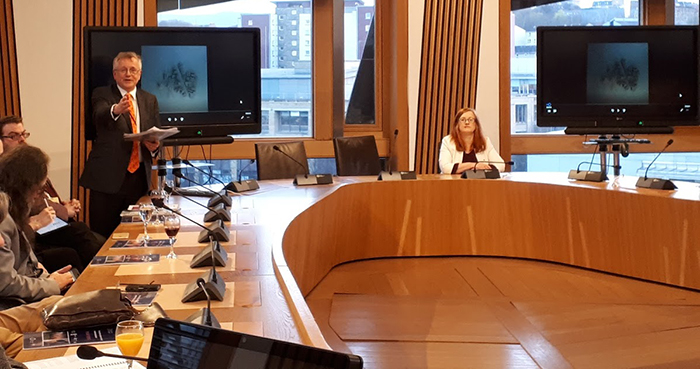 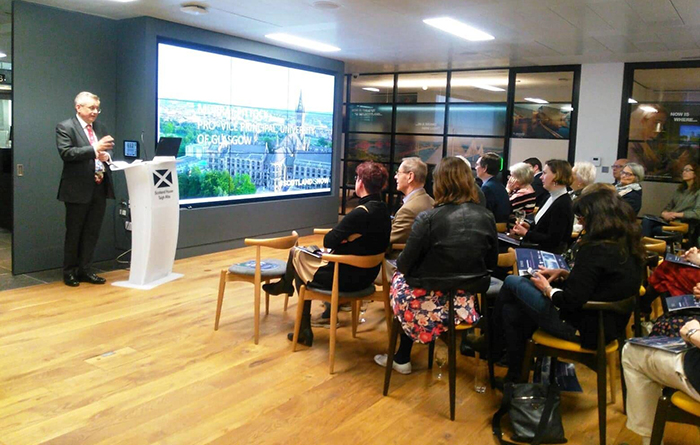