Storytelling and immersive technologies to connect us to our past 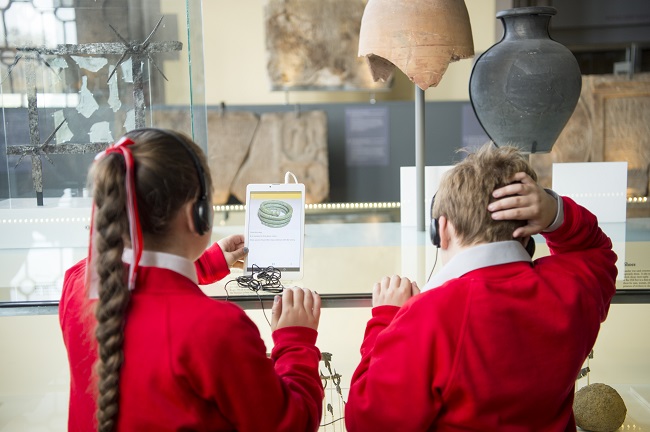 The way people lived their lives hundreds of years ago will be brought to life at a unique event being held at the Hunterian Museum at the University of Glasgow on Wednesday 30 October 2019.

Academics and specialists from cultural and creative industries will come together to showcase the tools and experiences they have created at the final public demonstration of the EMOTIVE project.

Funded through the European Union’s Horizon 2020 programme, the EMOTIVE project allows users to imagine what life might have been like hundreds of years ago through the power of Virtual Reality/Augmented Reality technology and digital storytelling.

EMOTIVE aims to develop emotional experiences for visitors at cultural heritage sites, in particular the UNESCO World Heritage sites of the Antonine Wall and the related Roman Frontier display at The Hunterian in Glasgow and the Neolithic site of Çatalhöyük in Turkey.

Experts in digital cultural heritage from the College of Arts at the University of Glasgow have been working over the last three years with industry and research partners from across Europe (Greece, Italy, France, Ireland, and the University of York in the UK) to design powerful and emotionally engaging cultural experiences that resonate with people’s lives today.

The EMOTIVE project team has created experiences which can be used both on-site at the Hunterian Antonine Wall gallery, as well as online by integrating the Museum’s objects and 360° panoramas of the gallery space. This virtual version of the experience has the potential to be used remotely by primary and secondary teachers to bring culture and history to life in the classroom by using technology to give a glimpse into how life may have been for our ancestors.

The EMOTIVE experiences designed for The Hunterian are centred around Roman history in Scotland - or Caledonia as it was known at that time. One EMOTIVE experience tells the story of a Roman centurion soldier and another of a local slave girl whose lives were shaped by their interactions with locals that lived along the Antonine Wall that ran across the Central belt of Scotland.

The dramatic and imaginative development of these characters’ stories is underpinned by historical and archaeological research and weaves in the ancient artefacts discovered from that time period.

However, creative and innovative use of VR/AR technologies in EMOTIVE allows visitors to the museum to not only immerse themselves in this history, but also discuss with one another issues of identity and what makes us who we are, both in the past and today.

The EMOTIVE demonstrations show how technology can be used to curate our heritage and culture in an era of social media and digitisation- and brings history to life for people of all ages and backgrounds.

Professor Maria Economou - research profile, Professor in Digital Cultural Heritage and Hunterian Curator at the University of Glasgow, said: “The EMOTIVE project has been very successful at demonstrating how digital technology, when used thoughtfully, can bring down barriers in engaging with our heritage and culture. Immersive technologies can be truly impactful when combined with storytelling and social interaction to encourage discussion amongst users.

“Cross-border collaboration on the EMOTIVE project would have been impossible without European Union funding and I think that EMOTIVE has shown how working with international partners can create an exciting, new and unique approach to accessing and enjoying heritage and history.”

Dr Sara Perry, representing the EMOTIVE user experience design team from the University of York, said: "EMOTIVE has opened our eyes to how we can use the distant past as the springboard for deep discussions about the present and future. Traditionally we've relied almost entirely on illustration, writing and up-to-the-minute visualisation technologies to help us create compelling visions of prehistory.

“But what EMOTIVE has done is flip the model around, demonstrating that these technologies can be used as facilitators of human-to-human conversations about the past, leading to complex understandings of who we are today and how we choose to act upon the world in years to come.”

The EMOTIVE demo event is supported by the newly-created Glasgow Digital Cultural Heritage Network, one of the University of Glasgow’s ‘Arts Labs’, and will provide an excellent opportunity not only to see the results of innovative digital heritage research, but also for experts from across the globe to share ideas on the future of digital interpretation.

The Hunterian Museum is one of the world's leading University museums and one of Scotland’s greatest cultural assets with collections including; scientific instruments used by James Watt, Roman artefacts from the Antonine Wall; an anatomical teaching collection and objects from Captain Cook’s Pacific voyages.

About EMOTIVE and the demonstrations:
From 2016-2019, the Emotive project team researched, designed, developed and evaluated a series of storytelling methods and tools for the cultural heritage sector. The outputs of this process are:

There are eight demonstrations in total on display on 30th October, including: