University of Glasgow researcher Dr Mark McGill (Computing Science) has partnered with Logitech and Dr Aidan Kehoe to deliver the project, ‘Novel Interactions for Mixed Reality with Logitech’. The project funded by EPSRC Impact Accelerator Account and Logitech (£40,000) commenced in July 2021 and will continue until March 2022.

Objectives of the project

Augmented Reality and Virtual Reality headsets (referred to in combination as Mixed Reality (MR)) all allow for 3D content, be it a sketching application, a virtual workspace, or immersive entertainment, to be rendered with depth around the wearer. These headsets are coming in increasingly compact and capable form factors, with the eventual end point being headsets that resemble standard glasses, and are wearable during everyday life.

Interaction with virtual content is typically facilitated through handheld controllers, hand gestures/direct touch, gaze pointing and speech. These are all modalities well suited to gaming for example, but ill-suited to productivity or everyday usage. Consider the architect or automotive designer working in 3D; the seated office worker in a virtual collaborative workspace; the commuter reading emails rendered on their glasses whilst walking to work – each of these scenarios has very different demands regarding how best to facilitate interaction with virtual MR content.

This project aims to develop a better understanding of how we can design the next generation of XR peripherals. Specifically, the UofG-led team will create new tools to enable performance benchmarking for XR peripherals, and develop novel interactions that can take advantage of the unique affordances of novel form factors such as tracked 6DoF pens. 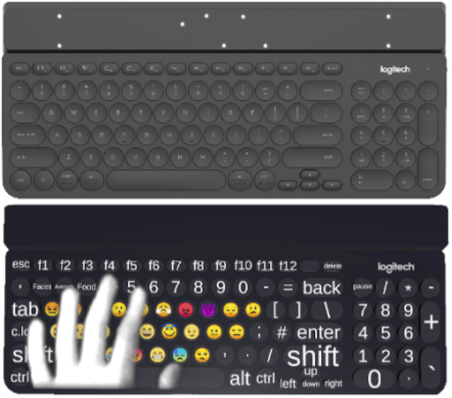 Logitech MR keyboard, a positionally tracked keyboard for use in VR.

Our Keyboard Augmentation Toolkit, developed for the Logitech MR keyboard, exploring how we could alter the form and function of the keyboard in MR, here rendering emojis per-key for more expressive input. Right: A Logitech Ink VR Pen prototype (center) alongside a wacom pen (left) and a handheld controller (right).